The Traitor Review – The Real Goodfellas: Cosa Nostra On Trial 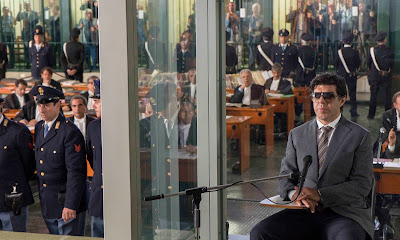 Peter Bradshaw at the Guardian offers a review of Marco Bellocchio’s The Traitor, a film about the 1986 maxi of Sicilian Cosa Nostra members and Tommaso Buscetta, a Cosa Nostra boss who testified against them.

Marco Bellocchio’s The Traitor is a big, handsomely shot, true-crime gangster movie, ranging over 30 years from the early 1970s to the late 90s, scripted by Bellocchio with screenwriters Valia Santella, Ludovica Rampoldi and Francesco Piccolo. The film has the authoritative air of official history: sometimes brash, sometimes stolid, sometimes with flashes of inspiration and sometimes with long stretches of courtroom dialogue. It is in these sections where Bellocchio is perhaps self-consciously concerned, as a major Italian film-maker, to be seen delivering a definitive cinematic account of an important period of modern Italian life. Well, it was certainly a sound instinct to show the courtroom scenes at some length, because however bizarre and chaotic it could be, the court of law is the moral centre of these events.


His subject is Italy’s sensational anti-mafia Maxi trial of 1986, in which hundreds of Sicilian mobsters were convicted, on the testimony of a tiny number of high-up pentiti, or informers, of which the most important was Tommaso Buscetta, a bulkily intimidating, charismatic presence portrayed here by Italian character actor Pierfrancesco Favino.
He was the important Cosa Nostra guy who astonished everyone by committing the ultimate sin: treason. He snitched to the cops.