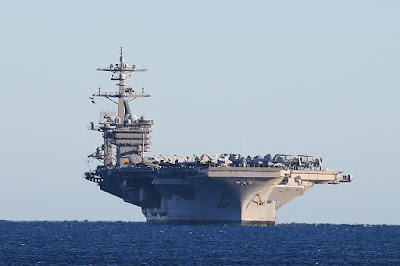 The FBI released the below information:
U.S. Navy Petty Officer 2nd Class Stephen Kellogg III was sentenced last Friday at a general court-martial to three years of confinement after pleading guilty to charges related to the illegal communication of national defense information. Kellogg will receive a dishonorable discharge from the Navy and a reduction in rank from E-5 to E-1.
From May to September 2018, Kellogg, 26, served aboard the nuclear-powered warship USS Carl Vinson (CVN-70) as a Nuclear Electrician’s Mate (EMN2). In this position, Kellogg had access to classified national defense information relating to the capabilities, operations, and maintenance of Navy nuclear propulsion systems.
According to a pretrial agreement, Kellogg admitted that while on active duty on August 27, 2018, he attempted to board a commercial airline from San Diego, California, to New York City with the intention of providing classified information regarding the U.S. Navy’s nuclear-powered warships to a journalist whom he thought would release the information to the public.
Kellogg separately admitted to, in July and August 2018, telling his roommate that he was planning to defect to Russia. During this time-period, Kellogg searched the Internet for information relating to flights to Moscow, contact information for the Russian Consulate in San Diego, and contact information for Sevmash, a Russian shipbuilding enterprise. He wrote to an email address associated with Sevmash stating, “I am willing.”
Furthermore, Kellogg admitted that, in May and August 2018, he photographed controlled spaces containing sensitive Navy Nuclear Propulsion Program information aboard the USS Vinson. He then communicated those photos to his father and ex-girlfriend, neither of whom possess a security clearance nor have a need to know about classified Naval Nuclear Propulsion Program information.
Kellogg also admitted that during June 2018 to August 2018, he failed to obey a lawful general order by wrongfully storing classified information in his berthing.
“The FBI is committed to protecting the nation’s critical assets, advanced technologies and sensitive information in the defense sector against all counterintelligence threats.” said Acting FBI Special Agent in Charge Suzanne Turner. “As demonstrated by this case, the FBI works closely with NCIS to investigate and prosecute those military members who intentionally risk our national security and violate the oath they took to protect our nation.”
“This sailor’s attempts to disclose classified Navy nuclear propulsion information posed a significant threat to national security and endangered the lives of American service members,” said Special Agent in Charge Garrett Waugh of the Southwest Field Office. “NCIS will continue to prioritize counterintelligence efforts as well as investigate and disrupt espionage activity directed at the Navy and Marine Corps.”
The investigation was conducted jointly by the Federal Bureau of Investigation - San Diego Division and the Naval Criminal Investigative Service - Southwest Field Office. Investigators were also assisted by the San Diego Harbor Police Department. The case was prosecuted by Cmdr. Chris Czaplak, U.S. Navy Judge Advocate General’s Corps, Senior Trial Counsel, Region Legal Service Office Southwest, Naval Base San Diego.
Posted by Paul Davis at 9:13 PM