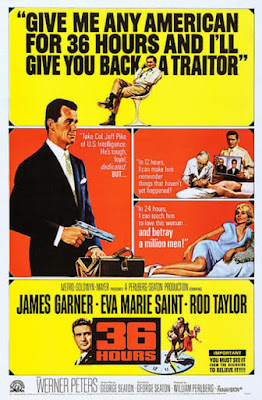 I saw 36 Hours in a movie theater when I was a kid back in 1964 and I watched the movie on TV a few years ago. The World War II espionage film, starring James Garner, is an interesting, suspenseful and very clever wartime spy thriller.


Doug Oswald at Cinemaretro.com offers a review of the film, which Warner Archive has just released on Blu-Ray.

James Garner is an American Army intelligence officer who is one of the men behind the planning of D-Day when he’s kidnapped by the Germans in neutral Portugal just days prior to the invasion of Normandy in “36 Hours,” released on Blu-ray as part of the Warner Archive Collection. Major Jefferson Pike (Garner) is sent on a routine intelligence gathering mission to Lisbon, but it turns out to be a ruse by the Germans to kidnap Pike in order to get him to reveal the invasion plans. They drug him and transport him to Germany where Pike wakes up six years later in a U.S. Army hospital suffering from amnesia. It’s 15 May 1950 and the war has been over for several years, but Pike can’t remember anything after his night in Lisbon.

In reality, it’s still a few days before D-Day and the Germans have created an elaborate deception in order to convince Pike he’s receiving treatment at a military hospital in American occupied Germany. The Allied invasion was victorious, and the war is over. Pike’s doctor, Major Walter Gerber (Rod Taylor), is in reality a German psychiatrist who developed the elaborate plan in order to gather the invasion plan date and location for Nazi Germany. A base camp filled with fake Americans and German nationals are roaming the grounds to set Pike at ease and disorient him at the same time, but also to convince him he is indeed located at an American military hospital in Germany. The Germans have gone to elaborate steps to make the trap work by dying the edges of his hair gray and putting drops in his eyes to trick him into believing he needs prescription glasses in order for Pike to accept he has aged six years. There are fake newspapers in his room, pictures of his parents, American books and a fake radio station plays American “oldies” from the 1930s and early 40s. He also learns he’s married to Anna Hedler (Eva Marie Saint), his nurse for all these years and a Jewish concentration camp survivor. Gerber has 36 hours to complete his plan, but he is under extreme pressure from Gestapo agent Werner Peters (Otto Shack) to use torture in order to retrieve the information in Pike’s head.

https://cinemaretro.com/index.php?/archives/10440-REVIEW-36-HOURS-1964-STARRING-JAMES-GARNER,-EVA-MARIE-SAINT-AND-ROD-TAYLOR;-WARNER-ARCHIVE-BLU-RAY-RELEASE.html
Posted by Paul Davis at 7:59 AM