A Look Back At Director Don Siegel's Crime Thriller 'Madigan' 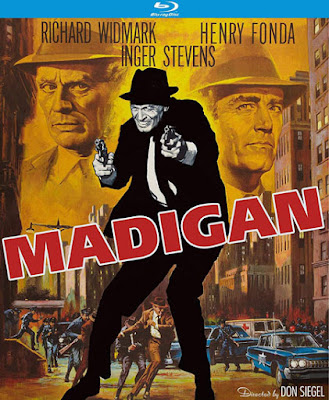 Don Siegel, who died in 1991, made several good crime films, including another two crime thrillers I like, Charley Varrick, with Walter Matthau, and Madigan, with Richard Widmark, Henry Fonda and Harry Guardino.


Raymond Benson offers a review of the Blu-Ray Special Edition of Madigan at Cinemaretro.com.


The filmmaker who made the iconic Clint Eastwood vehicle, Dirty Harry in 1971 also made something of an early test-run three years earlier in the form of a crime picture called Madigan.


Don Siegel (credited here as “Donald” Siegel for some odd reason, for he had been “Don” in earlier films) had been a solid craftsman since the 1950s, responsible for such works as Riot in Cell Block 11 (1954), the original Invasion of the Body Snatchers (1956), the admirable remake of The Killers (1964), and Coogan’s Bluff (1968). Likewise, Madigan is a well-made thriller with a hard-boiled plot and realistic characters portrayed by an excellent cast that includes Henry Fonda, Inger Stevens, and James Whitmore.


The tale begins when Madigan (Widmark) and his partner Rocco Bonaro (Harry Guardino) screw up while attempting to bring in hoodlum Barney Benesch (Steve Inhat) for questioning, unaware that he is wanted for murder in Brooklyn. Benesch gets the upper hand on the pair and runs away with their guns. Police commissioner Russell (Fonda) isn’t happy about this, but he has other problems on his mind.