A Look Back At Donald Rumsfeld, The Nation's Youngest, Oldest Defense Secretary 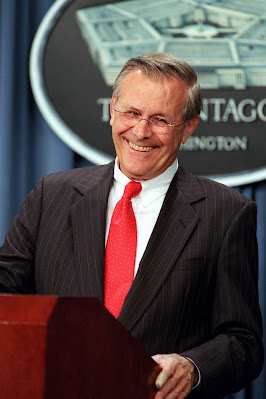 Terri Moon Cronk and Jim Garamone at the DOD News offers the below piece on the passing of Donald H. Rumsfeld.

Donald H. Rumsfeld, who died today at age 88, was the only defense secretary who served twice in the role of Pentagon leader and principal assistant to the president on defense matters.

Rumsfeld also was the youngest and the oldest person to hold the office, serving at age 43 as the 13th secretary under President Gerald R. Ford from 1975 to 1977, and then as the 21st secretary from 2001 to 2006 under President George W. Bush, leaving office at age 74.

"I was saddened to hear today of the passing of former Secretary of Defense Donald H. Rumsfeld," Secretary of Defense Lloyd J. Austin III said in a written statement, "Mr. Rumsfeld had the singular distinction of holding that post for two nonconsecutive tenures, serving as both the 13th secretary of defense and the 21st. He also served in the U.S. Navy in 1954-57 as a pilot and a flight instructor, and he continued his service as a reservist until 1975, when he became secretary of defense for the first time.

"Over the decades of his remarkable career, from Congress to the White House to the Pentagon, Secretary Rumsfeld was propelled by his boundless energy, probing intellect, and abiding commitment to serve his country. On behalf of the Department of Defense, I extend my deep condolences to his family and loved ones."

Rumsfeld was in the Pentagon on Sept. 11, 2001, when American Airlines Flight 77 crashed into the building. The secretary ran to the scene and helped evacuate those injured in the attacks. Rumsfeld remained at his post in the National Military Command Center even as the other side of the building burned and smoke threatened to drive workers out of the offices. He coordinated with military commanders around the world for America's response to the terrorist attacks. That night, he held a news conference in the still-smoldering building.

In the days and weeks after the attack, Rumsfeld worked with foreign leaders as the United States crafted the campaign against al-Qaida — the terror group behind the attacks. American forces commenced operations against the group in October 2001 with military attacks in Afghanistan.

Rumsfeld was born July 9, 1932, in Evanston, Illinois. He went to Princeton University on academic and Navy ROTC scholarships, and he served as a Navy pilot from 1954 to 1957. He worked in a variety of high-level positions in government, and also spent time in the corporate world.

He served as a U.S. congressman, a top aide to four presidents, a high-level diplomat, the chief executive officer of two Fortune 500 companies, and as the only two-time defense secretary.

In 1962, at age 30, Rumsfeld was elected to Congress, serving Illinois' 13th Congressional District. President Richard M. Nixon appointed him to head the Office of Economic Opportunity in 1969. Subsequently, Nixon appointed him as a counselor, and he also chaired the Economic Stabilization Program before he was appointed as U.S. Ambassador to NATO.

After Nixon resigned as president in August 1974, Rumsfeld was called back to Washington and served as President Gerald R. Ford's chief of staff. Ford nominated Rumsfeld as the 13th defense secretary in 1975, a job he served in through 1977.

After that stint of government service, Rumsfeld went into the private sector as president of G.D. Searle & Co. He later served as CEO of General Instrument from 1990 to 1993, and was chairman of Gilead Sciences from 1997 to 2001.

Rumsfeld began his second stint as defense secretary in January 2001. Just before the Sept. 11, 2001, terrorist attacks on the United States, Rumsfeld had set his sights on cutting defense expenditures on old weapons and moving to new ones that could better handle the new threats of the 21st century. Rumsfeld also wanted to review the military's organization and reshuffle troops to allow the country to react quickly, anywhere in the world. ​

Following numerous controversies during the wars in Iraq and Afghanistan, including alleged prisoner abuse and torture, Rumsfeld became a lightning rod for criticism of the Bush administration. He resigned as defense secretary effective Dec. 18, 2006, and was succeeded by Robert M. Gates.

He established the Rumsfeld Foundation in 2007, which provides fellowships to talented people from the private sector who want to serve temporarily in government. The foundation has granted nearly 200 fellowships. 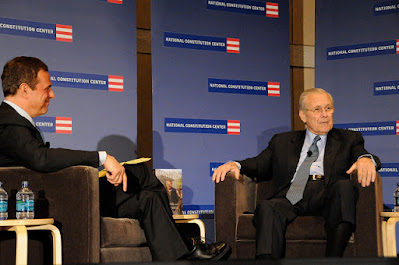 I covered Rumsfeld when he spoke at the National Constitution Center in Philadelphia in 2011.

You can also read my Counterterrorism magazine piece on Rumsfeld via the below link:

Paul Davis On Crime: My Piece On Former Defense Secretary Donald Rumsfeld Discussing The Iraq War And 9/11 At The National Constitiuion Center In Philadelphia