'The Sack Of Palermo': Buried In Concrete: How The Mafia Made A Killing From The Destruction Of Italy’s South 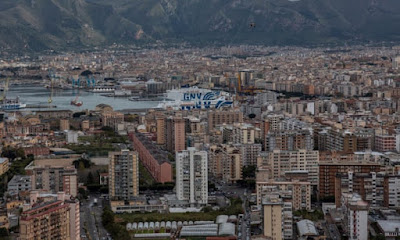 I have fond memories of visiting Palermo, Sicily in 1975 when I was a young sailor assigned to a U.S. Navy tugboat stationed at the nuclear submarine base in Holy Loch, Scotland.

I took two weeks leave and visited the place where many years before my maternal grandparents, named Guardino, left the island and sailed for South Philadelphia.

So I was interested in reading Roberto Saviano and Lorenzo Tondo’s piece at theguardian.com on organized crime in Palermo, Sicily and the south of Italy.

It is the result of a building frenzy of the 1960s and 1970s, when Vito Ciancimino, a mobster from the violent Corleonesi clan, ordered the demolition of splendid art nouveau mansions to make space for brutalist tower blocks, covering vast natural and garden areas with tonnes of concrete. It is one of the darkest chapters in the postwar urbanisation of Sicily and would go down in history as the “sack of Palermo.”

Buried in concrete: how the mafia made a killing from the destruction of Italy’s south | Mafia | The Guardian