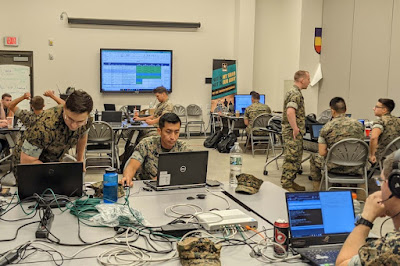 David Vergun at the DOD News offers the below piece:

Adversaries have heavily invested in cyberspace operations and capabilities. As such, cyber operations, cybersecurity and information operations are increasingly important to the joint force, said the commander of U.S. Cyber Command, who's also the director of the National Security Agency.

"The scope of what we need to defend and protect has dramatically expanded," Army Gen. Paul M. Nakasone said today during a virtual address to the U.S Naval Institute and Armed Forces Communications and Electronics Association's WEST Conference.

"We used to think about cyberspace as merely the need to protect these computer networks. And while it's a good place to start, the attack surface is much broader," Nakasone said.

For example, protecting weapons systems is a related but distinct challenge compared to networks, he said. They require software updates and patches. In the case of the Navy, they're onboard ships that don't return to port for months at a time, making it even more challenging to provide timely updates.

Another challenge with weapons systems is ensuring that cybersecurity considerations are implemented in the earliest phases of the acquisition cycle, he said.

Protecting DOD's data is also a major challenge, he said.

Understanding how state and non-state adversaries are able to successfully carry out cyberattacks is important, he said. "They learn over time in terms of what they can do. They're not static in the terms of how they approach cyberspace."

In about the past 150 days, adversaries have successfully conducted supply chain attacks, particularly ransomware attacks, he said. In the last several years, election cybersecurity has taken on an increasingly important role.

Terrorist groups are also mounting cyberattacks, he said. In response, the department has emphasized close teamwork between the NSA, Cybercom, and other commands — U.S. Special Operations Command, in particular.

"We learned how to work closely with U.S. Special Operations Command, both to support their efforts against kinetic targets and to leverage their capabilities against virtual ones," he said.

Nakasone also emphasized the importance of working with industry, academia, interagency partners like the FBI and the Department of Homeland Security, as well as with allies and partners.

Having a skilled and motivated workforce is also critically important, he said. They need to have the right training and career paths and professional development opportunities, and the DOD must be open to their new ideas.