Cal Thomas: Dictators Like Putin And Hitler Only Know Power, Resolve And Resistance 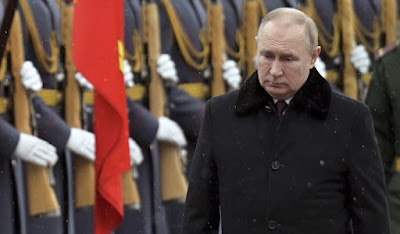 Cal Thomas compares Putin to Hitler in his column in the Washington Times.

Russian President Vladimir Putin’s invasion of the sovereign nation of Ukraine under several pretexts reminds me of Adolf Hitler’s rationale for invading and annexing Sudetenland in 1938 and his invasion of Czechoslovakia and Poland a year later. Then, as now, the excuse was that German-speaking people (then) and Russian-speaking people (now) wanted to be part of Germany (then) and Mother Russia (now).

In both cases, the excuses for invasion, occupation and murder were just that — excuses. Some commentators say there has been nothing like Mr. Putin’s invasion of Ukraine since World War II. There are dwindling numbers of people alive who lived through that period and witnessed the evil of Nazi brutality and genocide.

President Ronald Reagan lived through that era. This is why he coined the phrase “evil empire” to describe the Soviet Union. It’s one thing to read about evil in history books, but it is quite another to have witnessed it. One need only listen to Holocaust survivors for a powerful lesson in how deep human depravity can sink if it is not opposed.

One of the definitions of evil is “The force in nature that governs and gives rise to wickedness and sin.” In our age of moral relativity where nearly everything is tolerated and justified — except people who oppose the new societal norms — who speaks of wickedness and sin? It’s getting harder to find preachers known for sermons on the subject.