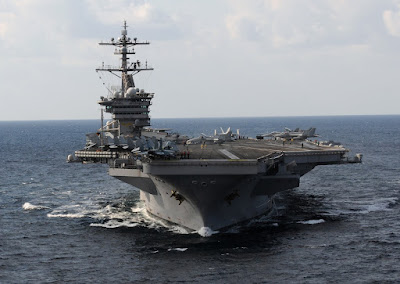 Having served on the aircraft carrier USS Kitty Hawk as a young sailor during the Vietnam War, I know just how dangerous air operations on a carrier can be.

The New York Post offers a leaked video of an aircraft crashing on the deck of the Aircraft carrier USS Carl Vinson.

Leaked video captured the harrowing moment a fighter jet crashed onto the deck of the aircraft carrier USS Carl Vinson before plunging into the South China Sea last month.

The pilot was recovered after ejecting from the F-35C Lightning II, which was seen bobbing in the water without its canopy. Seven sailors were wounded in the Jan. 24 incident.

“The ship has assessed that the video and photo covered in the media … were taken on board USS Carl Vinson (CVN 70) during the crash,” US Navy 7th Fleet spokesperson Cmdr. Hayley Sims told Military.com in an email.