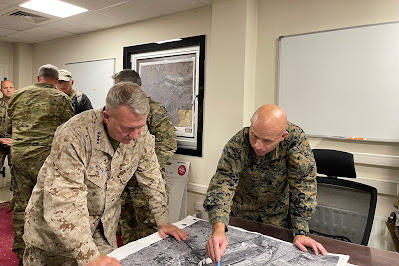 Terri Moon Cronk at the DOD News offers the below piece:

The ISIS leader who died during a U.S. Special Operations long-range helicopter raid on a mission to capture him in northwest Syria was "every bit as evil and committed to attacks on the United States and its partners as was his predecessor [Abu Bakr al-Baghdadi]," said Marine Corps Gen. Kenneth F. McKenzie Jr., commander of U.S. Central Command (Seen on the left in the above photo).

McKenzie spoke to the Middle East Institute yesterday on the latest developments in U.S. strategy and the challenges and opportunities facing the United States and its regional partners in the year ahead. He also commented on Wednesday night's raid in Syria, part of Centcom's area of responsibility.

Abu Ibrahim al-Hashimi al-Qurayshi, also known as Haji Abdullah, refused to give himself up to U.S. special operators and killed himself in a massive explosion, McKenzie said. There were no U.S. casualties.

"While Baghdadi was iconic and a philosopher, in ISIS, [Abdullah] was actually far more of an operational planner and director of operations," the general said. "He was directly or indirectly responsible for numerous atrocities, including those against the Yazidis early on and ISIS' reign of terror in Iraq and Syria," he added.

"He killed himself and his immediate family without fighting, even as we attempted to call for his surrender and offered him a path to survive," he said, noting that Abdullah was ejected from the building during the explosion and was identified by fingerprint and DNA analyses.

"I want to commend the expertise and bravery of the U.S. forces that executed the mission and our interagency partners who planned, supported and executed the mission," McKenzie said. "I would also like to acknowledge the support of our Syrian Democratic Forces partners in Syria, who made invaluable contributions to the success of the mission."

The general said the Defense Department deeply regrets the loss of life of any non-combatants, but ISIS fighters were directly or indirectly responsible for every family member who perished in the mission through their "cowardly" acts or through their choice to fight U.S. forces. He added the professionalism of U.S. forces saved the majority of non-combatants and pursued every possible opportunity to save all of those who were present.

"The death of Haji Abdullah is a clear signal that the United States remains focused and committed to finding and eliminating the terrorists who are plotting to do us harm, and we will not rest while their organizations remain committed to terrorism and violence against the international community in the United States of America," the Centcom commander said. "It's also a signal to all of those who wrongfully proclaimed that the United States was no longer interested in or committed to security in the U.S. Central Command area of responsibility. Nothing could be further from the truth, and this mission confirms that," he added.

Some of the most immediate and credible threats to the U.S. homeland emanate from the Centcom area of responsibility, McKenzie said.

Following the conclusion of the Afghanistan war in late July 2021, the United States now appreciates with the "stunning clarity of hindsight" that neither the Afghanistan government nor its defense forces retain the will to defend their country in the U.S.' absence, he noted. “As soon as this became clear, Centcom set in motion what would ultimately prove to be the largest airborne, non-combatant evacuation operation in history, a separate mission that concluded on 30 August, 2021. After the evacuation of over 123,000 Americans, third-country nationals and at-risk Afghans, this was an exceptionally complex and dangerous mission conducted in contact with ISIS-K, a vile foe. I will never forget the heroic and innocent lives that were lost during this operation. But neither will I forget the thousands of lives saved and the dedication of the men and the women who made the U.S. evacuation possible,” he added.

McKenzie said that even without a U.S. presence, the United States cannot relent in its campaign to degrade and ultimately defeat the violent extremist organizations that would export terror to our shores, adding that ISIS remains the greatest terrorist threat to the United States. "We have come a very long way since the dark days of 2014 when ISIS had overrun Raqqa [in Syria] and Mosul [Iraq] and threatened Baghdad with the invaluable contributions of nations that would form Combined Joint Task Force Operation - Inherent Resolve," he noted.

ISIS has, nevertheless, reconstituted as an asymmetric threat, and it continues to terrorize the innocent populations of Iraq and Syria whenever it can, McKenzie added.

ISIS' desire to harm the United States is as intense as ever, he said, adding that there is a way to deal with them. "ISIS fighters are brutal and relentless, but they're also fairly conventional military targets," the general said. "Our task is to find, fix and finish them."

Iran remains a central threat, McKenzie said. "Specifically, my mission is to deter Iran from undertaking malign activities that undermine the security and stability of the region," he added.

"It's my assessment that Iran is now evaluating its options — everything from de-escalation in diplomatic normalization to ramping up attacks against coalition forces," McKenzie said.

From a geostrategic perspective, the general said it's not surprising that China has made deliberate, steady inroads into a region that’s essential to its "Belt and Road" initiative. "Last year's strategic cooperation agreement between China and Iran, as well as recent joint naval exercises with Iran and Russia in the Indian Ocean, sent a clear signal of China's intention to counter American influence in the region," he said. The Chinese are eager to push the sale of their military equipment to U.S. partners, and they're fully aware it compromises the United States’ ability to integrate these countries into collective defense architectures, he added.

"The Chinese move with great speed, notwithstanding major muscle movements. in the South China Sea, and this sort of insidious activity is what the frontline of strategic competition looks like today, and nowhere is it more active than in the Middle East," McKenzie said.

Turning to Russia, "We need not await the passage of time to discern the nature of Russia's interests in the region or elsewhere," he said. "Whereas China's approach is rational and patient, that of Russia is essentially opportunistic."

Russia's disregard of international norms is nowhere clearer at present than on the borders of Ukraine, where Russia has amassed a concentration of conventional military power that belies any legitimate, peaceful purpose, McKenzie said, adding that as the Centcom commander, Ukraine would not normally demand his attention, but the situation there is far from normal.

Note: The above photo was taken by Captain William Urban.