Justice For Kiki: My Threatcon Column On the Capture Of Mexican Drug Lord Caro-Quintero 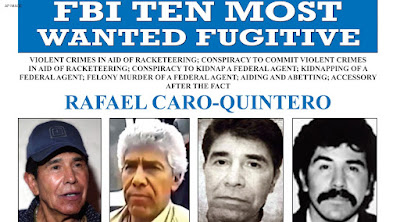 Counterterrorism magazine published my online Threatcon column on the capture of drug lord Rafael Caro-Quintero:
Rafael Caro-Quintero, a Mexican fugitive drug lord wanted for the 1985 murder of DEA Special Agent Enrique “Kiki” Camarena (seen in the below photo), was captured by the Mexican Navy’s elite special forces on July 15, 2022.

The fugitive drug lord now faces extradition to the U.S. for the infamous torture and murder of the DEA agent.

Caro-Quintero, one of the founders of the brutal and powerful Guadalajara Cartel, kidnapped Camarena and tortured him horribly before finally murdering him. American officials claim Caro-Quintero was the mastermind behind Camarena’s murder.

Caro-Quintero served 28 years of a 40-year sentence in a Mexican prison for the Camarena murder prior to his being released in 2013 due to a legal technically. U.S. officials had requested Mexico extradite Caro-Quintero prior to the drug lord going underground. Since then, the U.S. has offered a $20 million dollar bounty on the fugitive drug trafficker.

Camarena’s tragic story was dramatized well in the Netflix series Narcos Mexico in 2018.

Also in 2018, Caro-Quintero was placed on the FBI’s Ten Most Wanted Fugitives list.

The FBI’s then-Deputy Director, David L. Bowdich, and other officials announced the addition of Caro-Quintero to the Ten Most Wanted Fugitives at a press conference.

“Fugitive Rafael Caro-Quintero marks the 518th addition to the Ten Most Wanted Fugitives list,” the Justice Department stated in a release at the press conference. “Caro-Quintero is wanted for his alleged involvement in the 1985 kidnapping and murder of DEA Special Agent Enrique Camarena Salazar, aka “Kiki.” This is the first time a DEA fugitive has been placed on the Ten Most Wanted Fugitives list.”

“Together with our federal partners at the DEA. the U.S. Marshals Service, and the U.S. Department of State, we are committed to bring to justice this dangerous criminal and cartel leader responsible for the brutal murder of a DEA agent,” said Bowdich at the press conference. “Special Agent Camarena was devoted to stopping drug trafficking and breaking the cycle of drug-related crime. He showed tremendous courage to pursue the most violent drug traffickers, and it is because of his courage, and his selflessness, that we’re not going to stop looking for Caro-Quintero until we find him and put him behind bars where he belongs.”

Also in 2018, the Eastern District of New York announced the unsealing of an additional indictment against Caro-Quintero, alleging his role as the leader of a continuing criminal enterprise and the individual responsible for the murder of Camarena. The indictment detailed his leadership in trafficking methamphetamine, heroin, cocaine, and other drugs into the U.S. from 1980 to 2017.

According to the Justice Department, Caro-Quintero is regarded as one of the Mexican “Godfathers” of drug trafficking, and he helped to form the Guadalajara Cartel in the late 1970s. He allegedly became one of the primary suppliers of heroin, cocaine and marijuana to the U.S., and he was in charge of the cartel in Costa Rica and the U.S./Mexican border.

In November of 1984, Mexican authorities raided a 2,500-acre marijuana plantation owned by Caro-Quintero. The Guadalajara Cartel blamed Camarena for the takedown. And they decided to retaliate by kidnapping Camarena.

“Camarena, a former Marine, firemen, police officer, and deputy sheriff, was extremely close to unlocking a million-dollar drug pipeline from Mexico to the United States in 1985,” the Justice Department stated. “Before he was able to expose the drug-trafficking operation, he was kidnapped en route to lunch wife his wife on February 7, 1985min Guadalajara, Jalisco, Mexico.

“Allegedly, the direct orders for the kidnapping came from Caro-Quintero. Camarena was surrounded by five armed men who threw him into a car, then sped away. It is believed that Camarena died within two to three days of his kidnapping, but his body was not found until March 5, 1985.”

And now in 2022, Caro-Quintero is in Mexican custody and U.S. officials are requesting that he be extradited to America, a fate that drug lords consider worse than death.

On July 15th, U.S. Attorney General Merrick Garland issued a statement regarding the capture of Caro-Quintero.

“There is no hiding place for anyone who kidnaps, tortures and murders American law enforcement. We are deeply grateful to Mexican authorities for their capture and arrest of Rafael Caro-Quintero. Today’s arrest is the culmination of tireless work by the DEA and their Mexican partners to bring Caro-Quintero to justice for his alleged crimes, including the torture and execution of DEA Special Agent Enrique “Kiki” Camarena,” the statement read. “We will be seeking his immediate extradition to the United States so he can be tried for these crimes in the very justice system Special Agent Camarena died defending.”

Hopefully, there will finally be true justice for Kiki Camarena when Caro-Quintero is slapped into a small cell in an American Supermax federal prison. 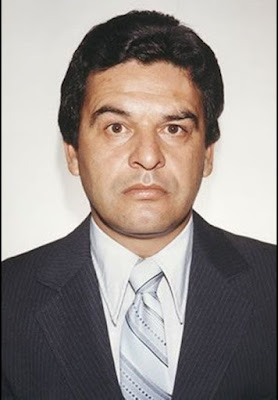