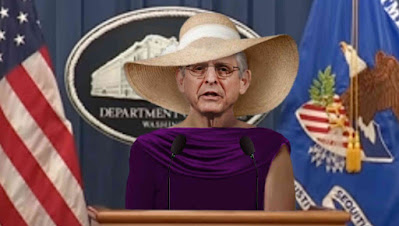 The Babylon Bee offers a clever and funny satirical piece on the Trump raid.

WASHINGTON, D.C. — With many Americans up in arms over the unprecedented raid of former President Trump's residence in Mar-a-Lago by the FBI, Attorney General Garland released a statement to assure everyone the raid was completely justified. Eyewitnesses noted he looked unusually fetching in an elegant Dolce & Gabbana evening gown and a Dior sun hat.

"We wouldn't raid Trump's Mar-a-Lago estate or Melania's wardrobe unless it was absolutely, 100% necessary," said Garland. "I resent any accusation that this raid was influenced by partisan politics or my insatiable desire to wear pretty designer dresses." The Attorney General then did a little spin in his purple gown as the press gasped with delight.

FBI Director Christopher Wray echoed the statement as he strode up to the Hoover Building in a dazzling pair of diamond-encrusted Alexander McQueen stilettos. "The men and women of the FBI are paragons of unassailable integrity and impartiality, and any suggestion otherwise is murderous treason," he said. Several news outlets present also noted the delicious smell of Chanel No.5 in the air.

At publishing time, Trump took to Truth Social to announce that all his golf clubs were also missing.

You can read more Babylon Bee humor pieces via the below link: