Goldfinger? Dr No? Not To Worry. James Bond's True Adversary - Too Many Martinis 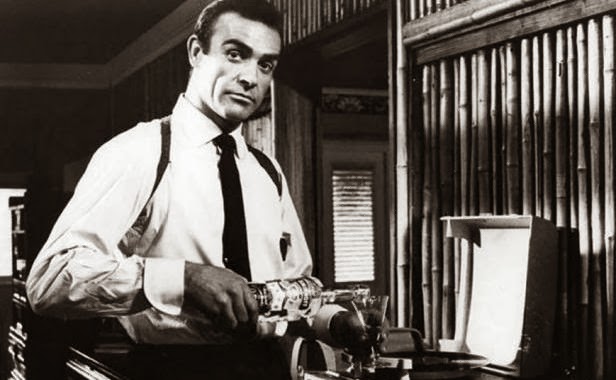 The British newspaper the Telegraph offers a piece on a study on Ian Fleming's iconic fictional character James Bond and his drinking habits.

James Bond’s love of martinis would have left him both shaken and stirred as he consumed four times the weekly recommended alcohol limit, doctors have said.


Despite his dangerous exploits, the famous spy was more at risk of dying from liver disease or drink driving than a bullet, according to a study in the British Medical Journal.
His high cocktail consumption may have even induced an alcohol-related tremor in his hands preventing him from stirring his drinks and explaining his preference for a shaken martini, the researchers said.
The team read all 14 of Ian Fleming’s novels over six months to test whether the secret agent would have been able to cope with his high octane profession while drinking heavily.

Note: Have they nothing better to research?

They could have saved time, effort and money by simply  reading Ian Fleming's Thunderball.

In the beginning of Fleming's thriller he has Bond sent to a clinic because he is drinking too much.

Fleming also wrote Bond's (and his own) epithet: "I shall not waste my days in trying to prolong them. I shall use my time."
Posted by Paul Davis at 6:46 PM