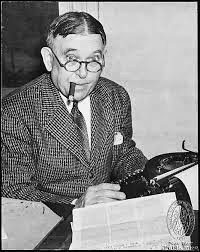 Steve King at todayinliterature.com notes that on this day in 1917, H. L. Mencken's "A Neglected Anniversary," his hoax article on the American invention of the bathtub, was published in the New York Evening Mail.

Mencken's lifelong campaign to deride and derail Main Street America -- the "booboisie" -- had a number of easy victories, but this joke succeeded beyond his wildest dreams and in Swiftian proportions.

In the omniscient tone of newspaper editorials, Mencken lamented and reprimanded that such an august cultural moment as the seventy-fifth anniversary of the bathtub should arrive and "Not a plumber fired a salute or hung out a flag. Not a governor proclaimed a day of prayer. Not a newspaper called attention to the day." This was worse than unhygienic; it was unpatriotic. A thankless, forgetful nation had forgotten that the first bathtubs -- these, of course, appeared in Cincinnati -- had been met with contempt by the social watchdogs, who thought them "an epicurean and obnoxious toy from England, designed to corrupt the democratic simplicity of the Republic," and by the medical profession, who thought them likely to induce "phthisic, rheumatic fevers, inflammation of the lungs and the whole category of zymotic diseases."

... To Mencken's amazement and delight, this history of the triumphant American tub was swallowed and spread by newspapers and radio stations across the country. The "facts" were duly incorporated into reference books; the health and hygiene industry, not to mention the plumbers, touted the happy day; the White House calendar-makers, noting Mencken's claim that Millard Fillmore (chosen surely for his name) was the first President to install one, paid tribute to his tub.

Eight years after the original article Mencken attempted to pull the plug by publishing various confessions, but many regarded the confession as the hoax, and his bogus bathtub anniversary continued to be commemorated in many quarters. All of which more or less proved Mencken's point, one more political and personal than whimsical.