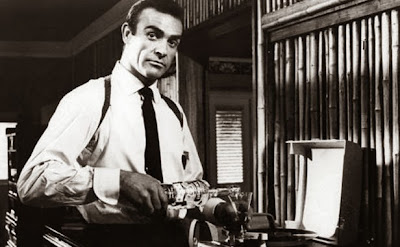 Somebody actually did a study that found that because of his hard-drinking lifestyle, the character James Bond would live to be only 56 years old. When men heard that they were like, “Yeah, I'd take that deal.”

Note: Was a study really needed?

They also could have saved time, effort and money by simply reading Ian Fleming's Thunderball.

In the beginning of Fleming's thriller he has Bond sent to a clinic because he is drinking too much.

Fleming also wrote Bond's (and his own) epithet: "I shall not waste my days in trying to prolong them. I shall use my time."
Posted by Paul Davis at 5:20 PM