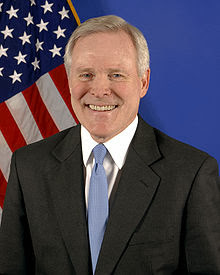 Matthew M. Burke at Stars and Stripes offers a piece on the U.S. Navy bribery scandal.

Secretary of the Navy Ray Mabus (seen in the above U.S. Navy photo) has ordered a review of how husbanding and port service contracts are handled after the recent corruption and bribery scandal ensnared a handful of high-ranking officers.


In a Dec. 5 memo, Mabus instructed Assistant Secretary of the Navy for Research, Development and Acquisition Sean Stackley to review “all acquisition strategies” worldwide and determine whether proper procedures are being followed. He also told the Navy auditor general to audit the contracts to improve internal controls.
Husbanding and port service contracts assist Navy ships and sailors when they pull into a foreign port and include everything from goods and services such as fuel or docking, to water and sanitation. Mabus’ memo is in addition to guidance laid out in September after investigations by the Naval Criminal Investigative Service and audits by the Naval Audit Service raised concerns.
“This review will ensure we have the proper procedures and policies in place to ensure we live up to our responsibility to the American taxpayer,” Mabus said in a Navy statement released Monday. “This is a responsibility I take seriously, and we will take the necessary steps to ensure we do not violate their trust.”
The GDMA scandal — named after the Singapore-based defense contractor Glenn Defense Marine Asia — broke in September when the Justice Department announced the arrests of Cmdr. Michael Vannak Khem Misiewicz, former deputy operations officer aboard the USS Blue Ridge for the Yokosuka-based U.S. 7th Fleet; NCIS supervisory agent John Bertrand Beliveau II; and GDMA head Leonard Glenn Francis.
You can read the rest of the piece via the below link:
http://www.stripes.com/news/navy-to-review-port-contracts-in-light-of-bribery-scandal-1.256885
Posted by Paul Davis at 1:27 AM