My Washington Times Review Of 'The Trident: The Forging And Reforging Of A Navy SEAL Leader 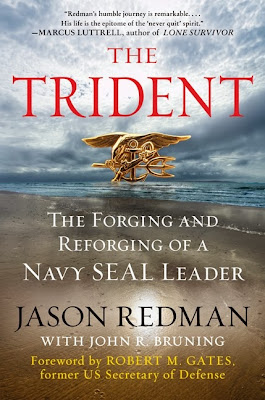 My review of Jason Redman's The Trident: The Forging and Reforging of a Navy SEAL Leader was published in the Washington Times.

The sign on the wounded Navy SEAL’s hospital door at the Walter Reed National Naval Medical Center in Bethesda was written on poster paper with a black Sharpie. The sign begins with the word “Attention.”

And the sign went on to receive national attention.

Lt. Jason Redman's sign read: “ATTENTION TO ALL WHO ENTER HERE. If you are coming into this room with sorrow or to feel sorry for my wounds, go elsewhere. The wounds I received, I got in a job I love, doing it for people I love, supporting the freedom of a country I deeply love. I am incredibly tough and will make a full recovery. What is full? That is the absolute utmost physically my body has the ability to recover. Then I will push that about 20% further through sheer mental tenacity. This room you are about to enter is a room of fun, optimism and intense rapid re-growth. If you are not prepared for that, go elsewhere. From: The Management.”

Jason Redman, author of “The Trident: The Forging and Reforging of a Navy SEAL Leader,” is a highly decorated former Navy SEAL lieutenant who served as an enlisted SEAL for 11 years and nearly 10 years as a SEAL officer. He commanded mobility and assault forces in Colombia, Peru, Afghanistan and Iraq. Lt. Redman conducted more than 40 capture-kill missions with his men in Iraq, locating more than 120 al Qaeda insurgents.

... “The Trident” is a not only a tale of a Navy SEAL in action and his grueling medical recovery after being wounded. The book is also a touching story of Lt. Redman's love for his wife and children and their vital support during his recuperation. The book also offers a candid and blunt appraisal of his failures as a SEAL officer. Although he states he was a good enlisted SEAL operator, Lt. Redman recounts his many shortcomings as an officer, admitting freely that he drank too much and that he had been arrogant.

... “The Trident” is a frank, compelling and inspiring chronicle of an American warrior’s journey.

http://www.washingtontimes.com/news/2013/dec/22/book-review-the-trident/
Posted by Paul Davis at 2:34 AM