'Blockbuster!’: The Strange Tale Of The Best-Selling Crime Novel Of The 19th Century 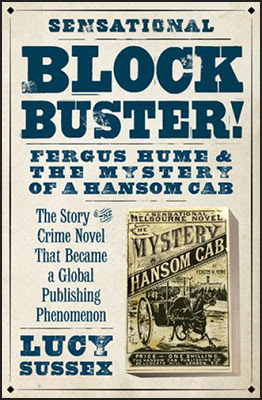 Michael Dirda at the Washington Post offers a review of Lucy Sussex's Blockbuster! Fergus Hume & the Mystery of a Hansom Cab.


Publishing history is full of strange tales, and that recounted by Lucy Sussex in “Blockbuster! Fergus Hume & the Mystery of a Hansom Cab” is certainly among the strangest and most poignant. In late 1880s Australia a would-be dramatist decided that he might gain more attention from theater impresarios if he were a published author. So Fergus Hume sat down to produce what ultimately became the best-selling crime novel of the 19th century.
These days, “The Mystery of a Hansom Cab” is frequently derided as ill-written or faintly embarrassing, although such reactions puzzle me. In fact, the novel presents an almost Dickensian, top-to-bottom portrait of Melbourne in its Victorian heyday, when the population of the “London of the South” approached half a million. Moreover, the plotting of the mystery is exemplary. Two gentlemen in formal evening dress, both seemingly drunk, enter a hansom cab late one night in July. Later, one man gets out and disappears, the other remains — and is found dead, apparently murdered. Before the crime is solved, Hume gradually uncovers the hidden threads connecting Melbourne’s most and least respectable citizens, transporting the reader from elegant country houses to the city’s Chinese slums and lowest brothels. The book is certainly worth reading.
You can read the rest of the review via the below link: