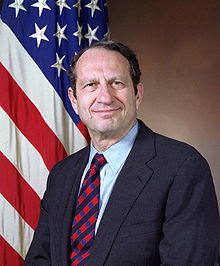 The FBI Director said there was not a precedent for prosecuting former Secretary of State Hillary Clinton for gross negligence and the improper handling of classified information - http://www.pauldavisoncrime.com/2016/07/statement-by-fbi-director-james-b-comey.html

But many observers have noted that former CIA Director John M. Deutch (seen in the above DoD photo) would have been prosecuted for his improper handling of classified information had he not been pardoned by then-President Bill Clinton.

You can read the CIA's Inspector General's report on Deutch via the below link:

And there is the prosecution of a Naval Reservist who was successfully prosecuted for mishandling classified material - http://www.navytimes.com/story/military/crime/2015/07/29/navy-engineer-sentenced-for-mishandling-classified-material/30862027/

Note: President Bill Clinton lied to a Grand Jury, an offense that would have put an average street cop in prison for five years, but he was given a slap on the wrist. Now it appears that Hillary Clinton will also skate in this investigation. Are the Clintons truly above the law? Both Clintons are currently being investigated for corruption regarding their Clinton Foundation, so the "jury" is still out.

Syndicated columnist Charles Krauthammer's take away from the FBI Director's statement was to note that Hillary Clinton "was a non-criminal liar."
Posted by Paul Davis at 9:13 PM