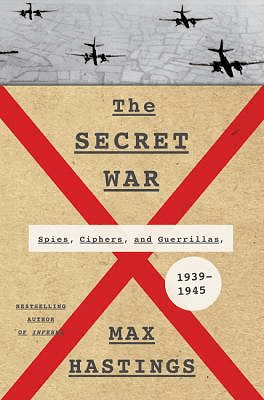 Paul Jablow offers a review of Max Hasting's The Secret War: Spies, Ciphers, and Guerrillas for the Philadelphia Inquirer.

At first glance, Joseph Rochefort was about as unlikely as a war hero gets. A mediocre (at best) naval officer, he narrowly escaped court martial when a destroyer on which he was the duty officer dragged its anchor in San Francisco bay amid six destroyers.

He was transferred to cryptoanalysis when fellow officers noted his penchant for crossword puzzles and bridge. It was Rochefort who played the key role in cracking the Japanese codes that allowed the smaller U.S. fleet to anticipate a June 1942 attack on Midway island, sink four carriers and a cruiser, and turn the tide of war in the Pacific.

Yet Rochefort was unlikely only if one sees espionage as a glamorous job. As Max Hasting points out in this magisterial work, it is often a slow, frustrating search for a flash of light in a corner of an enormous, dark room. Even when leaders note the light, they often ignore it when it fails to match their preconceptions.

You can read the rest of the review via the below link:
http://www.philly.com/inquirer/entertainment/20160731__The_Secret_War___Masterful_history_of_the_wasteful_art_of_espionage.html

You can read Joseph C. Goulden's Washington Times review of The Secret War via the below link:
http://www.pauldavisoncrime.com/2016/05/the-secret-war-spies-ciphers-and.html
Posted by Paul Davis at 7:31 PM