From Puppy To Protector: How The Air Force Raises Military Working Dogs 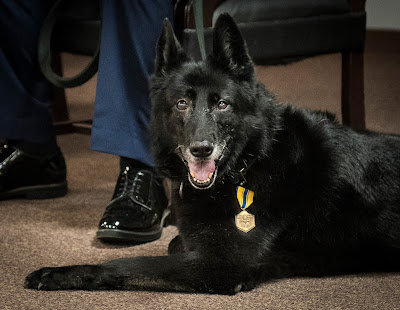 CANNON AIR FORCE BASE, N.M., Nov. 22, 2017 — Candy is a military working dog with six deployments under her collar, and on Nov. 9, she was finally able to rest her paws when she officially retired from duty during a ceremony here.

Her career, like hundreds of canines before her, serves as a reminder of how powerful a four-legged airman can be.

For most of these working dogs, it all starts across the Atlantic Ocean. The Military Working Dog Buying Program will travel to European kennels to purchase canines for the Defense Department. In some cases, however, MWD’s are born and raised at Lackland Air Force Base, Texas, where training occurs for both canines and their aspiring handlers. The way to tell the difference between foreign and domestic canines is in their name. For example, if their title is “MWD Kkeaton” or “MWD Ttoby,” the double consonant will signify they’re a dog raised through Lackland’s Puppy Program. Names without the double consonant are for all other adopted dogs.

After being adopted, the dogs live with foster families before the initial training regimen begins when they are 18-24 months old. Once they enter the training program, the dogs have 120 days to graduate. 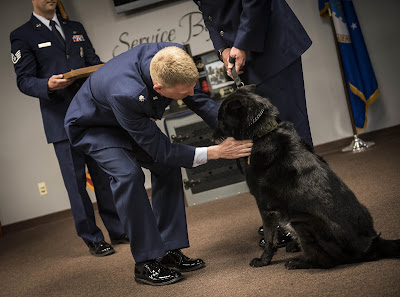 During this training, they learn all the basics. Basic commands such as down, sit and stay are the starting point. Once they learn these commands, the canines begin learning more advanced techniques such as patrol work, detection and more. Successfully completing the four-month program means they’ll graduate and be assigned their base.

Simultaneously, aspiring dog handlers are training nearby. It was an experience that, for Air Force Staff Sgt. Kyle Pethtel, a dog handler with the 27th Special Operations Security Forces, was fun and filled with challenges for both canine and handler.

“It felt hard at times because you didn’t know how much work it takes to become [a handler],” Pethtel said. “I remember how nervous we’d be [when] pulling our first working dog.”

Before they get to handle their first working dog, the handlers must also learn the basics and proper commands. Not only that, they also must learn how to groom the dogs and keep them fit to fight.

When the newly trained dogs arrive at their first assignments, they will be assigned a handler and begin learning more advanced techniques.

From there, it’s all about strengthening the bond between handler and canine. Just like airmen in an office, team chemistry is a vital component for these working dog teams to accomplish the mission. Between base patrols and deployments, the bond only strengthens each time they put their bulletproof armor on.

“When we do convoys, canines lead,” said Air Force Staff Sgt. Paul Little, a 27th SOSFS dog handler. “When we’re downrange, dog teams lead the way. It’s one of the most vital components to any mission they’re involved in.”

It’s an honor that Candy, one of the most experienced and decorated military working dogs in the DoD, had one last time before she traded in those heavy vests for a simple collar and leash. After eight years of service, she received an Air Force Commendation Medal and retired to her new home in Colorado with Air Force Tech. Sgt. Joshua Fehringer, one of her former handlers.

From puppy to airman, the career cycle of these canine service members is long and arduous and requires as much sacrifice as the thousands of human airmen they serve and protect.

Note: The above U.S. Air Force photos were taken by 1st Class Lane Plummer.
Posted by Paul Davis at 2:54 PM