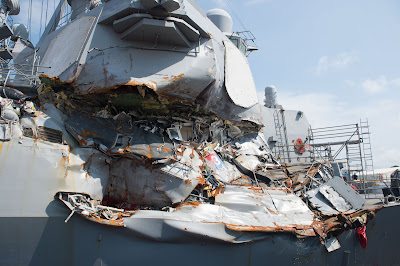 Navy Adm. John Richardson told Pentagon reporters that many aspects combined to cause the accidents, including lack of training, hubris, sleep deprivation, failures in navigation and failures in leadership.

The guided missile destroyers USS Fitzgerald and USS McCain sailed when they shouldn’t have, he said, and that decision falls on the commanders, who are responsible for conducting risk assessments.

“When you have a gap between those two, that’s risk,” the admiral said. “It's all part of that … day-to-day assessment. Every commander has to wake up each day at their command level and say, what has changed in my security environment? What is my new risk posture? And how am I going to accommodate or mitigate that risk?”

At some point, commanders cannot mitigate the risk, and they should say no to the mission, he said, but the present culture is such that commanders will assess the risk to be acceptable when it is not.

Changing that culture is one goal for the chief -- he wants commanders to be honest about assessments and the shortfalls they have.

While the changes are in the 7th Fleet area, the Navy is on all the seas. “A review of your Navy today shows that this morning there are 100 ships and 64,000 sailors and Navy civilians who are deployed,” Richardson said.

“This includes three carrier strike groups and their embarked air wings, three amphibious readiness groups, and their embarked Marine expeditionary units, six ballistic missile defense ships on station, 11 attack submarines, five [ballistic missile submarines],” he said. “The vast majority of these ships are conducting their missions, some of them extremely difficult, effectively and professionally, protecting America from attack, promoting our interests and prosperity, and advocating for the rules that govern the vast commons from the seafloor, to space, and in cyberspace.”

The Navy and its sailors are busy, and they have been integral to the wars America has fought since 9/11. “Recent experience has shown that if we're not careful, we can become overstretched, overextended. And if we take our eye off the fundamentals, we become vulnerable to mistakes at all levels of command,” the admiral said.

To address this, the Navy has taken some immediate actions, including restoring a deliberative scheduling process in the 7th Fleet, conducting comprehensive ready-for-sea assessments for all Japan-based ships, establishing a naval service group in the Western Pacific -- an independent body in Yokosuka, Japan that will keep their eye on readiness generation and standards for the Pacific Fleet commander -- establishing and using a near-miss program to understand and disseminate lessons learned, and establishing policies for surface ships to routinely and actively transmit on their automatic identification system, Richardson said.

Midterm actions will emphasize training, establishing comprehensive policies on managing fatigue and accelerating some of the electronic navigation systems upgrades, he said.

“I have to say that fundamental to all of this is how we prepare leaders for command,”


Richardson said. “We will deeply examine the way that we prepare officers for increasing leadership challenges, culminating in assumption of command with the capability and the confidence to form, train and assess warfighting teams on the bridge, in the combat information center, in engineering and throughout their command.”