Message To North Korea: The Military Might of The Three Carrier Task Force Underway 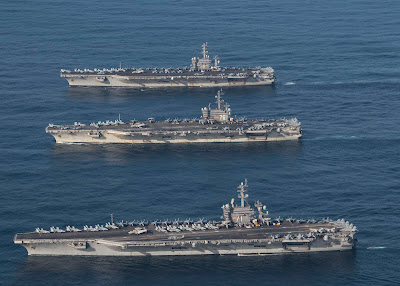 In the above U.S. Navy photo the aircraft carriers USS Ronald Reagan (CVN 76), USS Theodore Roosevelt (CVN 71) and USS Nimitz (CVN 68), along with their strike groups are underway, conducting operations, in international waters as part of a three-carrier strike force exercise near North Korea.

Note: The above photo was taken by Lt. J.G. James Griffin.

You can click on the above photo to enlarge.
Posted by Paul Davis at 5:06 PM