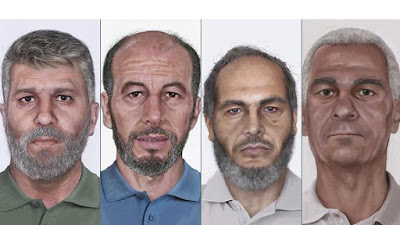 The U.S. Justice Department released the below statement:

The FBI Washington Field Office announced today the release of age-progressed photographs of four alleged hijackers charged in the United States with the September 5, 1986 attack of Pan American World Airways Flight 73 in Karachi, Pakistan: Wadoud Muhammad Hafiz al-Turki, Jamal Saeed Abdul Rahim, Muhammad Abdullah Khalil Hussain ar-Rahayyal, and Muhammad Ahmed al-Munawar. These images were created by the FBI Laboratory using age-progression technology and original photographs obtained by the FBI in the year 2000.The attack on Pan Am Flight 73 resulted in the murder of 20 passengers and crew, including two Americans, the attempted murder of 379 passengers and crew, and the wounding of more than 100 individuals on board.This announcement is in coordination with the U.S. Department of State Rewards for Justice Program, which is offering a reward of up to $5 million each for information leading to the arrest and/or conviction of the alleged hijackers. Each of these individuals is believed to have been a member of the Abu Nidal Organization (ANO), previously on the U.S. Department of State’s list of designated Foreign Terrorist Organizations.  Each suspect is currently on the FBI’s Most Wanted Terrorist List.Anyone with information regarding these terrorists is asked to contact the FBI, the nearest American Embassy or Consulate, or submit a tip on https://tips.fbi.gov, which can remain anonymous.Individuals on the FBI’s Most Wanted Terrorists List have been indicted by sitting Federal Grand Juries in various jurisdictions in the United States for the crimes reflected on their wanted posters. The indictments currently listed on the posters allow them to be arrested and brought to justice. Additional information regarding the FBI’s Most Wanted Terrorists program can be found at: https://www.fbi.gov/wanted/wanted_terrorists
Posted by Paul Davis at 8:56 AM