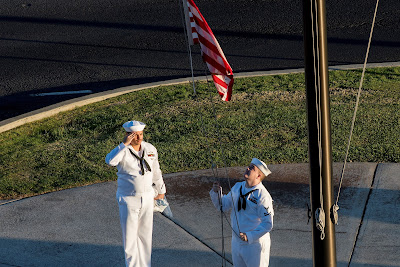 JOINT BASE PEARL HARBOR-HICKAM, Hawaii, Jan. 3, 2018 — As sailors hoisted the colors here Jan. 1 to start out the new year, the “First Navy Jack” rose under Old Glory, as it will throughout 2018 in honor of the 17 sailors lost when the guided missile destroyers USS Fitzgerald and USS John S. McCain collided with merchant ships in separate incidents last year.

The First Navy Jack is a flag consisting of a rattlesnake superimposed across 13 horizontal alternating red and white stripes with the motto, “Don't Tread On Me.” Commodore Esek Hopkins first employed it in 1775 as he readied the Continental Navy in the Delaware River during the Revolutionary War.

In recent years, the Navy has used the flag during difficult times to signify resolve.

Navy Rear Adm. Brian P. Fort, commander of Navy Region Hawaii and Naval Surface Group Middle Pacific, said the First Navy Jack is a reminder that the Navy’s warfighting edge not only is back, but also is renewed and forged with purpose.

“Here in Pearl Harbor, we rose to the challenge 76 years ago, as ‘Remember Pearl Harbor’ sharpened our warfighting culture,” he said. “In the wake of 9/11, when our culture was tested, we rose to the challenge once more. At the direction of the Secretary of the Navy Gordon England, we returned to our First Navy Jack, ‘Don’t Tread on Me,’ on the jack staffs of all Navy warships as a historic reminder of the nation’s and Navy’s origins and our will to persevere and triumph.”

Navy Command Master Chief Petty Officer Allen Keller, the base’s command master chief, said flying of the First Navy Jack is a symbol of resolve. He challenged the joint base family, service members and civilians alike, to move forward and build on the history and legacy of the country and the Navy.

“2017 was a challenging year for the Navy,” Keller said. “We as an installation will fly the Navy First Jack as a reminder to every airman, sailor, civilian and family member to get back to basics, honor our country and remember our history.”
Posted by Paul Davis at 12:18 AM