The Path Not Taken: Edward Lansdale And The American Tragedy In Vietnam 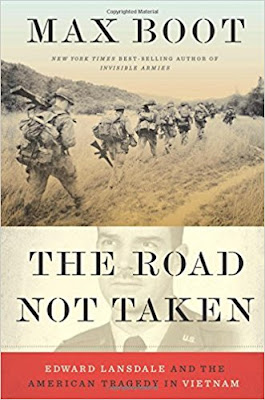 Gary Anderson offers a review of Max Boot's The Path Not Taken for the Washington Times.
Edward Lansdale is probably the greatest cold warrior that most Americans have never heard of. Max Boot has written a fascinating account of how this California college humorist, frat boy and advertising executive evolved into a counterinsurgency expert before the term was even coined. He was a virtual shadow American proconsul in both the Philippines and South Vietnam in the 1950s wisely advising both Philippine President Ramon Magsaysay and South Vietnamese leader No Dinh Diem on how to deal with Communist inspired insurgencies.
His success in the Philippines was spectacular and made his reputation. In Vietnam he was originally successful, but saw his influence wane for reasons beyond his control. However, he became the father of today’s American counterinsurgency doctrine even though few American advisers have been able to replicate his skill in influencing foreign leaders.
Max Boot has become one of the master chroniclers of American counterinsurgency efforts, and his biography of Mr. Lansdale is a tribute to a guy who recognized the threat of insurgency in a post-World War II environment where most American leaders saw only brute force a a solution to any political-military problem.
Although he never admitted it publicly until late in his life, Mr. Lansdale was a CIA agent with a cover as an Air Force advisory officer. In the Philippines of the early 1950s he became a personal adviser to the Philippine defense minister — and later president — Magsaysay in putting down the Communist inspired Huk rebellion by convincing Mr. Magsaysay that the key was not just killing insurgents, which only created more insurgents.
Mr. Lansdale argued that success was dependent on getting the people to stop supporting the insurgents, and have some hope that the government was a better alternative. Eliminating insurgents militarily was only a secondary part of the Lansdale approach. It worked in the Philippines because Mr. Lansdale developed a unique brand of trust with that nation’s leader.
When he was asked to do the same things in South Vietnam, Mr. Lansdale was initially successful in developing a personal rapport with Prime Minister Diem. However, Mr. Lansdale eventually lost influence with Mr. Diem due to the machinations of Mr. Diem’s brother No Diem Nhu and his manipulative wife Madam Nhu. Absent Mr. Lansdale, the Kennedy administration eventually lost confidence, and authorized a military coup that resulted in the death of both of Diem and his brother leading to a series of disastrous military juntas.
You can read the rest of the review via the below link:
https://www.washingtontimes.com/news/2018/jan/16/book-review-the-road-not-taken-by-max-boot/
Posted by Paul Davis at 4:42 AM