A Look Back At Mass Murderer Stalin 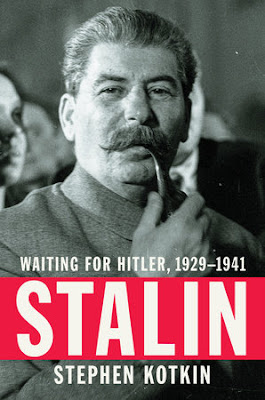 What caused Joseph Stalin to become one of history’s most notorious mass murders? Unlike Adolph Hitler, whose victims were anonymous Jews and other “undesirables” whom he did not know, Stalin’s victims included persons from his inner circle, fellow leaders of the Soviet Communist party.

Such is the grisly story related by Stephen Kotkin, a Princeton University professor, in the second volume of a planned trilogy on the Soviet tyrant. Even readers acquainted with Stalin’s blood-stained career will find sickening details that Mr. Kotkin gleaned from previously secret files. His academic work at times is more terrifying than a Stephen King novel.

“Confessions” that the innocent were forced to sign with their own blood. High officials of Stalin’s “inner circle” watching their wives hauled into captivity for non-existent “crimes against the state.” Stalin scrawling “execute” on a list of thousands of “traitors” which he would review (supposedly) in several hours.

Insecurity apparently ruled Stalin’s psyche. The crown of Vladimir Lenin, who brought communism to Russia, rested uneasily on Stalin’s head. Lenin left a written legacy proclaiming Stalin to be his successor, then waffled somewhat in a later oral statement

Thus Stalin spent his first years as dictator with a slippery grasp on power. His solution: destroy contemporaries (even those who were close friends) who might challenge his right to authority.

Once a few thousand murders established his rule, continuation of the terror was reflexive. As Mr. Kotkin writes, “Tyranny has a circular logic: once a dictator has achieved supreme power, he becomes keener still to hold it, driving him to weed his own ranks of even potential challengers.”

Of the 1.58 million persons arrested 1936-1938, 683,000 were victims of extrajudicial killings. To Stalin, “murder was an administrative tool,” Mr. Kotkin writes. He viewed close associates as comprising a “nest of spies.”

https://www.washingtontimes.com/news/2018/jan/4/how-stalin-treated-his-inner-circle/
Posted by Paul Davis at 1:04 AM