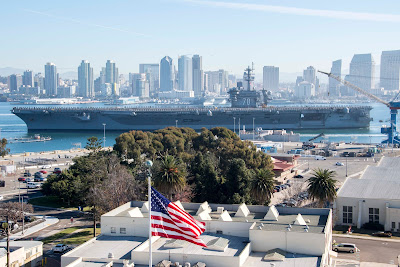 The U.S. Navy released a photo of sailors aboard the aircraft carrier USS Carl Vinson (CVN 70) manning the rails as the ship departs its homeport of San Diego.

The above photo was taken by Mass Communication Specialist 1st Class Omar A. Dominquez.

Note: The photo brings back memories from 1970, when I too manned the rails as we departed San Diego on board an aircraft carrier, the USS Kitty Hawk, headed for the Western Pacific, or WESTPAC, as we called it.

You can click on the photo to enlarge.
Posted by Paul Davis at 5:03 PM