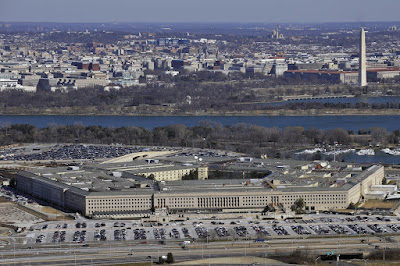 Stars and Stripes offers a piece on the Defense Department's new security strategy to combat espionage and sabotage in the military procurement system.
WASHINGTON — The Pentagon has a new goal aimed at protecting its $100 billion supply chain from foreign theft and sabotage: To base its weapons contract awards on security assessments — not just cost and performance — a move that would mark a fundamental shift in department culture.

The goal, based on a strategy called Deliver Uncompromised, comes as American defense firms are increasingly vulnerable to data breaches, a risk highlighted earlier this year by China's alleged theft of sensitive information related to undersea warfare, and the Pentagon's decision last year to ban software made by the Russian firm Kaspersky Lab.
"The department is examining ways to designate security as a metric within the acquisition process," Maj. Audricia Harris, a Pentagon spokeswoman, said in a statement. "Determinations [currently] are based on cost, schedule, and performance. The department's goal is to elevate security to be on par with cost, schedule, and performance."

You can read the rest of the piece via the below link:
https://www.stripes.com/news/us/pentagon-is-rethinking-its-relationship-with-us-defense-contractors-to-stress-supply-chain-security-1.542353
Posted by Paul Davis at 7:47 AM