The Art Of War By Sun Tzu: A New Translated By Peter Harris 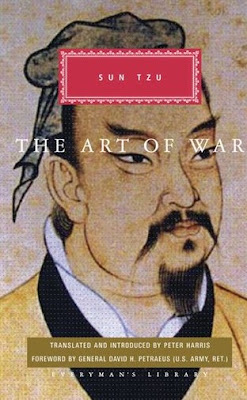 Gary Anderson, a retired Marine colonel, offers a review in the Washington Times of a new translation of Sun Tzu’s The Art of War.

Military theory comes in two forms. The first is an attempt to understand the nature of war and its relation to politics. Clausewitz and Machiavelli represent the best of this school.

The second and more prevalent form falls into the “how to do it” category. Most such works in this type of venue are written by former successful practitioners of the art and science of war. Most military professionals would agree that Sun Tzu’s “The Art of War” remains at the top of the former list. Peter Harris has given us a new translation, and perhaps a new twist, on this timeless classic.


Chinese in either its Mandarin or Cantonese versions, is a notoriously hard language to translate into English. As in Arabic, some characters have multiple meaning depending on the context in which they are used. Most former military officers of the Vietnam era were raised on Marine Brig. Gen. Samuel Griffith’s 1963 translation.

Griffith’s translation became popular during the Vietnam War because North Vietnam’s brilliant Gen. Giap was known to be a Sun Tzu student, as was Chairman Mao, who was then considered to be the primary sponsor of the North’s cause.

Before 1963, Western interest in Sun Tzu was spotty at best. It is highly unlikely that Erwin Rommel or George Washington had ever read Sun Tzu, but both made excellent use of deception, feigned retreats, reconnaissance and surprise to win their most notable victories in ways recommended in “The Art of War.”

Critics of Sun Tzu have complained that he depends too much on the non-military aspects of war fighting rather than the mere act of trying to kill more of the enemy than he kills of you.

Washington used campfires to cloak his disengagement from a superior enemy in several situations. Rommel won many battles by withdrawing his smaller tank force through a line of the superb 88-millimeter anti-tank guns allowing those weapons to break the momentum of the pursuing British allowing his tanks to counterattack on more favorable terms. Sun Tzu would have approved in both cases.