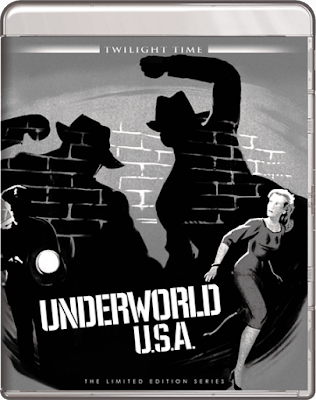 Lee Pfeiffer at cinemaretro.com offers a review of a crime film I loved as a kid, Samuel Fuller’s Underworld USA. The crime classic is now out on DVD.
Samuel Fuller (seen in the below photo) is today regarded as a revered name among directors. Unlike his peers- John Ford, Alfred Hitchcock, John Huston, Howard Hawks, to name but a few- Fuller didn't get much respect when he needed it, at least from critics and studio heads who regarded his talents as workmanlike.

Consequently, this talented director, screenwriter and occasional novelist and actor, toiled under meager budgets and scant support from studio executives. Fuller was typical of directors of his generation who had come of age during the Great Depression and World War II. 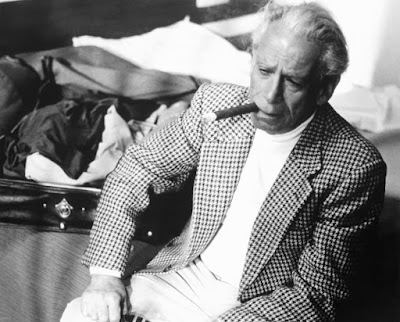 He had a tough guy persona and had learned to survive on the mean streets of Manhattan where he worked as a crime reporter in the 1930s. Fuller could have landed a cushy job in the military during the war but eschewed the opportunity in favor of volunteering for combat duty in the European campaign. His scripts were tightly-written, no-nonsense affairs and his direction was direct and to-the-point.

Fuller cut a larger-than-life figure with an out-sized personality and his penchant for indulging in cigars that were so large they looked as though they were inspired by cartoons. Despite the budgetary limitations on his films and the fact that he never enjoyed a career-defining breakaway hit, Fuller's movies have stood the test of time and before he died in 1997, he had witnessed his work being favorably reassessed by a new generation of directors and critics.
"Underworld U.S.A." is one of Fuller's true gems. A 1961 film noir crime story, the movie gave an early career boost to Cliff Robertson but its significance goes much deeper. Although viewed as a typical low budget crime thriller back in the day, the movie is a a true classic of the genre.
The film opens with 14 year-old Tolly Davlin (David Kent), a street-wise product of a crime-infested unnamed big city, witnessing the beating death of the father he idolized by a pack of enforcers from a mob syndicate that he had crossed. Tolly's dad, himself a low-life who was teaching his son how to survive in the urban jungle by being more cunning and ruthless than the competition. Tolly, now orphaned, finds the only friend he has is Sandy (Beatrice Kay), a tough-as-nails saloon owner who takes a maternal interest in Tolly, though he rarely heeds her advice. Tolly is consumed with avenging his father's death. He arranges intentionally builds up a criminal record leading to him being criminal record leading to him being incarcerated in a juvenile detention center- but all the while he is painstakingly following leads about who his father's murderers were and who employed them. 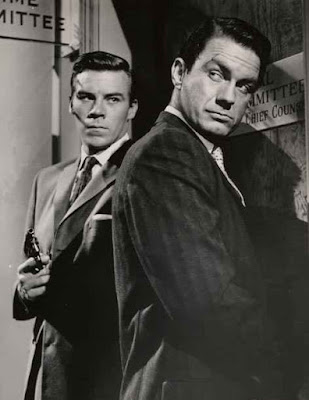 The story jumps ahead and we find Tolly now a young man in his late twenties (played by Robertson) having been incarcerated in a prison that houses one of the killers, a man who is literally on his death bed in the hospital ward. That doesn't stop Tolly from smothering him with a pillow and making it look like natural causes. When Tolly is released from jail, he reunites with Sandy and has a chance encounter with  a sexy gun moll who is nicknamed Cuddles (Dolores Dorn) who has been marked for death for having failed to carry out a mission for the mob. Tolly saves her life and secretes her in Sandy's apartment while he begins his pursuit of two other men who killed his father that fateful night. Having succeeded in getting his street justice, he goes for bigger game: the syndicate bosses.
You can read the rest of the review via the below link:
www.cinemaretro.com/index.php?/archives/10190-REVIEW-SAMUEL-FULLERS-UNDERWORLD-U.S.A.-1961-STARRING-CLIFF-ROBERTSON;-TWILIGHT-TIME-BLU-RAY-SPECIAL-EDITION.html
Note: I’d also recommend Samuel Fuller’s other great films, such as House of Bamboo, Merrill's Marauders, and The Big Red One.
Posted by Paul Davis at 2:24 PM