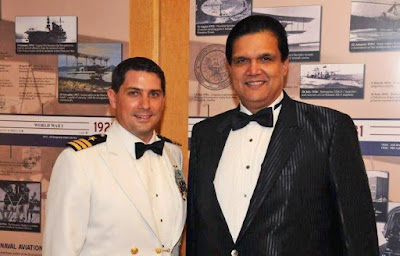 Mark D. Faram at the Navy Times offers a piece on the U.S. Navy’s “Fat Leonard” bribery and fraud scandal.


NAVAL STATION NORFOLK, Va. — With the close of the Navy’s first “Fat Leonard” court-martial trial, the defendant is going to the brig but he escaped the most serious charges and potentially jeopardized future federal fraud cases against a string of past and present sailors.


Cmdr. David Morales was found guilty of only two of the five charges he faced — conduct unbecoming an officer and failing to report foreign contacts on his security clearance renewal.


After closing arguments on Friday, the Navy trial judge, Capt. Charles N. Purnell, deliberated overnight and delivered a verdict that stripped out the conspiracy, bribery and making a false official statement charges.


On Saturday, Purnell sentenced the fighter pilot to 165 days of confinement, forfeiture of $30,000 in pay over the next five months and an additional $5,000 fine.


Morales faced 17 years behind bars if he was convicted on the original charges. After Purnell gutted the most serious remaining specifications on Saturday he was still staring at a maximum term of two-and-a-half years in the brig.

He ended up with less than six months in prison. www.pauldavisoncrime.com/2017/03/my-piece-on-fat-leonard-us-navy-bribery.html
Posted by Paul Davis at 5:18 AM