My Washington Times Review Of 'Inspector Oldfield And The Black Hand Society: America's Original Gangsters And The U.S. Postal Detective That Brought Them To Justice' 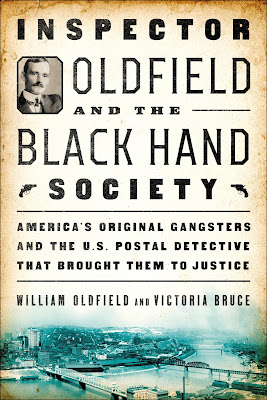 The Washington Times published my review of Inspector Oldfield and the Black Hand Society: America’s Original Gangsters and the Postal Detective That Brought Them to Justice.


“On the night of April 18, 1908, in the railroad town Bellefontaine, Ohio, eighteen-year-old Charles Demar walked into the fruit shop he owned with his uncle, Salvatore Cira, and put a bullet into his uncle’s head,” opens the story of a Post Office inspector who investigated Black Hand criminals — with a suitable bang.


When the police arrived, the victim appeared not to speak English, which was not uncommon among the roughly six million Italian immigrants across the United States at the time. Although the Italians were preyed upon by the violent extortionists who called themselves “La Mano Nera,” the Black Hand, the victims also feared and mistrusted the police.


The Bellefontaine police were glad to find two letters written in Italian in the victim’s pocket, as they could now hand off the murder case to the local Post Office Inspector, who had jurisdiction due to the letters.


The police brought the letters to the U.S. Post Office in Columbus and handed them to Inspector Frank Oldfield, a diminutive man in a well-fitting suit, who was chomping on a cigar.


“Oldfield pushed some papers and files aside and opened the letters. He made a quick visual scan of the documents with his magnifying glass. A satisfied smile appeared on his face.”


So begins “Inspector Oldfield and the Black Hand Society: America’s Original Gangsters and the U.S. Postal Detective That Brought Them to Justice.” The book was written by William Oldfield, the great-grandson of the late Post Office inspector, and journalist Victoria Bruce.


Mr. Oldfield discovered a trunk of his great-grandfather’s, which offered documents, letters and photos about his major Black Hand case. Victoria Bruce mined modern digital tools and came up with additional information about the case and the time.


The authors tell us that since arriving in Columbus in 1901, 40-year-old Inspector Frank Oldfield had become one of the most aggressive and successful Post Office inspectors in the service, According to the authors, “he’d run down safecrackers, exposed a corruption ring between a U.S. Congressman and a New York City assistant district attorney, and busted crooks on the railroads for robbing the mail.”


But there was nothing Oldfield wanted more than to “run to earth” what he believed was an international organized crime ring spanning America all the way to Palermo, Sicily: Truly bad guys whose members called themselves The Black Hand Society.’