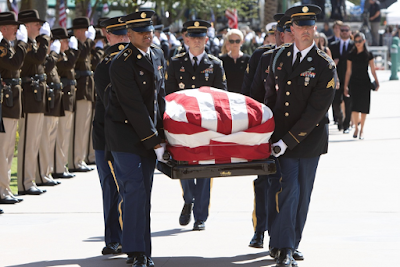 
McCain lost his battle with brain cancer Aug. 25 at age 81. He will be laid to rest tomorrow at the U.S. Naval Academy in Annapolis, Maryland.


The military provided ceremonial support for the retired Navy captain from body bearers and ushers to the U.S. Navy Band and U.S. Naval Academy Glee Club during a service that spanned two-and-a-half hours. 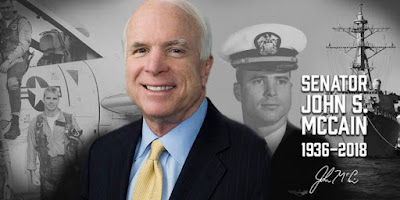 
Former President George W. Bush said what was remarkable about McCain’s life was the “amazing sweep” of it.


“From a tiny prison cell in Vietnam to the floor of the United States Senate, from trouble-making [Naval Academy] plebe to presidential candidate, wherever John passed throughout the world, people immediately knew there was a leader in their midst,” he said.


“And one epic life was written of courage and greatness of our country,” Bush added.


“John was, above all, a man with a code,” the former president said. “He lived by a set of public virtues that brought strength and purpose to his life and to his country.
“He was courageous, with a courage that frightened his captors and inspired his countrymen,” Bush said.
“As John would say: ‘My friends,’ we come to celebrate an extraordinary man -- a warrior, a statesman, a patriot, [who] embodied so much that is best in America,” former President Barack Obama said.


‘He Made This Country Better’


McCain showed a largeness of spirit and an ability to see past differences in search of common ground, the 44th president said.


He answered the highest of callings to do something that was bigger than he was by serving his country during a time of war, Obama said.


“Others this week and this morning have spoken of the depths of his torment and the depths of his courage there in the cells of Hanoi, when day after day, year after year, that youthful iron was tempered into steel.” he said of McCain’s five-and-a-half years spent as a prisoner of war.


In captivity, McCain learned how each moment, each day and each choice is a test, the former president noted. “And John McCain passed that test again and again and again. And that’s why when John spoke of virtues like service and duty, it didn’t ring hollow. Those weren’t just words to him. It was a truth that he had lived, and for which he was prepared to die.”


McCain was also lauded as a great family man, husband and father.


His daughter, Meghan McCain, gave the eulogy and said, “the nation is here to remember you,” to her father.


“That fervent faith, that proven devotion, that abiding love -- that is what drove my father from the fiery skies above the Red River Delta to the brink of the presidency itself,” she said.


“Dad,” McCain said, “your greatness is woven … into the life and liberty of the country you sacrificed so much to defend.”
Posted by Paul Davis at 4:56 PM