Beirut Rules: The Murder Of A CIA Station Chief And Hezbollah's War Against America 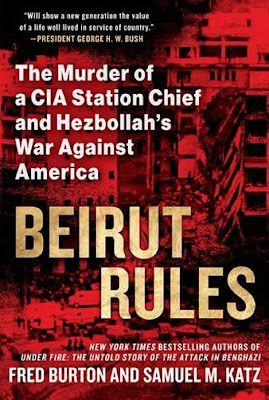 Joshua Sinai offers a good review in the Washington Times of Fred Burton and Samuel M. Katz’s Beirut Rules: The Murder of a CIA Station Chief And Hezbollah’s War Against America.


On March 16, 1984, William Buckley, the CIA station chief in Beirut, Lebanon, was kidnapped by Hezbollah operatives just as he had left his apartment building at 6:45 am and started driving his car to his office at the United States embassy compound, a two-minute drive away. The two cars driven by the Hezbollah kidnappers quickly blocked Mr. Buckley’s car and their operatives overwhelmed him with their firearms and hurled him into one of their cars, driving him to their hidden place of captivity. Mr. Buckley had been in his position since June 1983, and contrary to standard security practice, he was not accompanied by an embassy-provided driver or bodyguard. Mr. Buckley reportedly died in Hezbollah captivity in June 1985, despite the numerous measures the United States had employed to attempt his rescue.


Taking this high-profile kidnapping as its central focus, this book is a dramatic and engaging account of the American backchannel intelligence and military efforts to help restore order to Lebanon’s protracted Hobbesian civil war, with the Iranian- and Syrian-backed Hezbollah’s Shi’ite insurgency the primary antagonist.

https://www.washingtontimes.com/news/2018/oct/30/book-review-beirut-rules-by-fred-burton-and-samuel/
Posted by Paul Davis at 12:57 AM