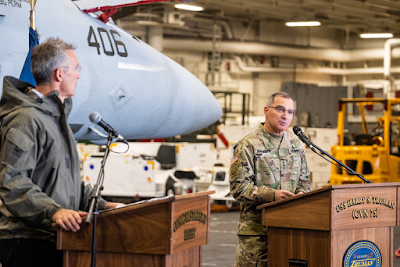 Jim Garamone at Defense.gov offers the below piece:


WASHINGTON, Oct. 15, 2018 — NATO Secretary General Jens Stoltenberg and Army Gen. Curtis M. Scaparrotti, the Supreme Allied Commander Europe and commander of U.S. European Command, made a statement about deterrence just by their presence aboard the aircraft carrier USS Harry S. Truman in the North Sea during an Oct. 12 news conference.


The carrier is participating in Exercise Trident Juncture 18, the largest NATO exercise since the 1980s. The exercise will be held Oct. 25-Nov. 7.
“From these decks, the USS Truman projects power to keep us all safe,” Stoltenberg said on the hangar deck of the massive ship. “It delivers deterrence every day. It helps keep our sea lines of communication open and it has been critical in the fight against terrorism, against ISIS in Syria and Iraq.” 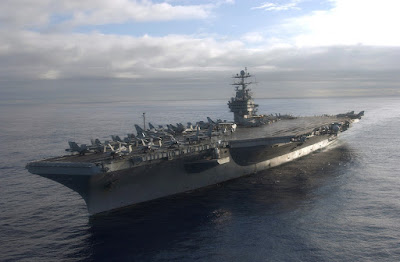 Trident Juncture showcases the defensive might of the 29-nation alliance. More than 45,000 service members, 60 ships and thousands of vehicles will participate in the exercise in and around Norway.
Testing NATO’s Collective Response Capability
Trident Juncture will test NATO’s collective response to an armed attack against one ally. “To keep our nations safe in an unpredictable world, we need to keep our alliance strong,” Stoltenberg said. “We do need to have the training and we need to train together in all domains; at sea, in air, on land and in cyberspace.”
The exercise will test NATO’s high-readiness forces, and send a clear message of alliance.
The exercise will test NATO nation’s ability to work together in a time of crisis, Scaparrotti said. “It will be an important test and, as you’ve seen today, a demonstration of our collective capabilities,” he said. “With all 29 nations, as well as Finland and Sweden participating across air, land and sea, … this Trident Juncture exercise is a prime example of NATO allies and partners working together. Trident Juncture 18 will demonstrate that, in an unpredictable world, NATO remains an anchor of stability.”
The general stressed that the alliance is changing and adapting to new threats not only from Russia but across the spectrum. Trident Juncture itself includes the cyber domain, space and activities short of war. NATO nations must train together to handle these new multinational, multi-domain threats.
“The challenge of doing that across 29 nations makes this complex,” he said. “I was just aboard a Danish flagship connected with ships from the United States, Portugal, Norway, sharing a common picture, working on common operating procedures, tactics and procedures, and doing quite well. So again, we’re ready and we’re getting stronger every day.”
Both Stoltenberg and Scaparrotti noted that the ship’s namesake, President Harry S. Truman, was in office when the Washington Treaty that established NATO was signed in 1949.
Posted by Paul Davis at 12:59 AM