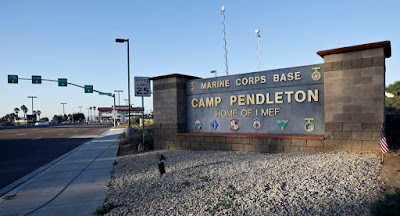 The Navy Times offers a piece on the arrests of Marines at Camp Pendleton.
SAN DIEGO — On the surface, it seemed like a simple task: Drive to a spot a few miles north of the U.S.-Mexico border, pick up people and then drop them off at a McDonald’s or other spot past the city of San Diego, and make anywhere from $500 to $1,000. No need to cross into Mexico.
Two Marines whose arrests earlier this month for migrant smuggling led to the stunning arrests of fellow Marines at Camp Pendleton described in federal court documents such an offer being made to them. The Naval Criminal Investigative Service on Friday said a total of 19 service members have been arrested at the base, including 18 Marines and a Navy corpsman, who all serve in the same unit.
The military personnel are accused of various crimes from migrant smuggling to drug-related offenses, but officials have not said exactly how they were involved.
You can read the rest of the piece via the below link:
https://www.navytimes.com/news/your-navy/2019/07/27/smugglers-offer-cash-to-marines-sailors/
Posted by Paul Davis at 2:27 AM