A Little Humor: Office Manager And Woman At Water Cooler 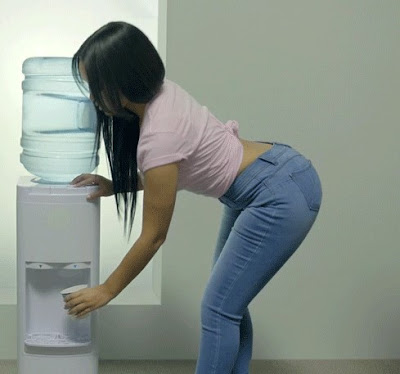 A manager of a failing branch of one company has to lay off one of his top paid employees to cut cost.

As he is analyzing the recent annual reviews, he is realizing that it comes down to his two favorites, Mary and Jack.

He spends hours looking back at the last five years these two have worked on his team. Both were hired the same month, have identical education and work experience. They are also both crucial to his team. It’s an incredibly tough decision to make and he decides that, if he can’t make it by the time he goes to bed, he will have to fire the first one he sees at the water cooler the next morning.


He is at the office bright and early, after a sleepless night, when he sees Mary walk into the office with bags under her eyes, hair in disarray and heading straight for the water cooler.


He meets her there and while she is filling her cup with water, he says sadly: “I have really bad news, I have to lay you or Jack off.”


Mary, looking at him through the slits in her eyes, takes a big gulp of water and says: “You'll have to jack off. I have a terrible hangover.”
Posted by Paul Davis at 4:14 PM