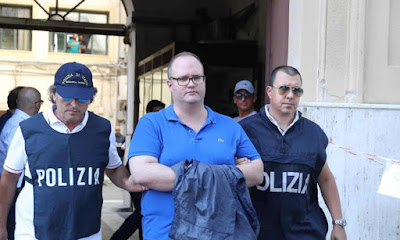 Angela Giuffrida at the Guardian offers a piece on an FBI and Italian police takedown of suspected Cosa Nostra organized crime members in Sicily and America.


Italian and US police have launched a coordinated crackdown on a Sicilian mafia family that was seeking to rebuild its power base after years of exile in the United States, Italian investigators said on Wednesday.


More than 200 police, including officers from the US Federal Bureau of Investigation (FBI), arrested 18 people in Sicily as part of their investigation into the Inzerillo clan in the island’s capital Palermo and the allied New York-based Gambino family.


A 19th suspect was arrested in the United States.


Sicily’s organised crime group, known as Cosa Nostra (Our Thing), has been in a state of flux since 2017, when its boss of bosses Salvatore “Totò” Riina died in prison, where he had spent almost a quarter of a century.


Riina launched a ferocious mafia war on the Mediterranean island in the 1980s, chasing the Inzerillo family out of their stronghold in the Palermo suburb of Passo di Rigano and into self-imposed US exile.


But Riina’s death gave the Inzerillo family a chance to attempt to reclaim its old territory, with the help of allies in New York, said police.