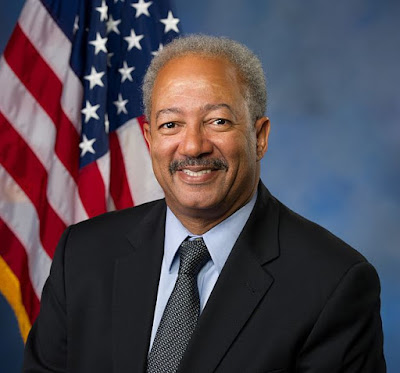 The U.S. Attorney’s Office for the Eastern District of Pennsylvania released the below information:
PHILADELPHIA – First Assistant United States Attorney Jennifer Arbittier Williams announced that former U.S. Congressman Chaka Fattah (seen in the above photo), Sr., 62, of Philadelphia, PA was resentenced to 10 years of incarceration by United States District Judge Harvey Bartle, III.
After a month-long trial in 2016, a federal jury found defendant Fattah and various co-defendants guilty of racketeering conspiracy, wire fraud conspiracy, honest services wire fraud conspiracy, mail fraud conspiracy, and multiple counts of mail fraud, falsification of records, mortgage fraud, and false statements to a financial institution.  The criminal conduct of Fattah and his racketeering enterprise was organized around five corruption and fraud schemes:  a loan repayment scheme, a Blue Guardians scheme, a college tuition scheme, a mortgage fraud scheme, and a fake conference scheme.  For his role in these schemes, Fattah was sentenced after trial to 10 years of incarceration.
Both parties appealed.  With regard to Fattah’s appeal, the Court of Appeals remanded for a new trial as to certain bribery and money laundering counts, concluding that the jury had not been properly instructed regarding “official acts” in a bribery context.  (The government thereafter announced its intention not to retry those counts.)  With regard to the government’s cross-appeal, the Court of Appeals reinstated certain counts that had been dismissed by the District Court post-trial.   The case was then remanded for resentencing.  Today, for these additional counts, Fattah was again sentenced to 10 years of incarceration.
“Let today serve as a warning to all public officials who allow greed or a thirst for influence to overpower any desire to serve the community honestly,” said First Assistant U.S. Attorney Williams.  “If you are a corrupt official, we will investigate and convict you, and we will remain steadfast behind our prosecution until the last appeal is wrapped up and the final proceeding complete.  Today’s sentencing illustrates the strength of our original case and the need to put Chaka Fattah behind bars for a very long time.”
The case was investigated by the Federal Bureau of Investigation, the Internal Revenue Service-Criminal Investigation, the Department of Justice Office of Inspector General, the NASA Office of Inspector General, the Department of Education Office of Inspector General, the Department of Commerce Office of Inspector General, and is being prosecuted by Assistant United States Attorneys Eric L. Gibson and Paul L. Gray.  Jonathan Kravis, former Trial Attorney with the Criminal Division’s Public Integrity Section of the U.S. Department of Justice, also prosecuted this matter.
Posted by Paul Davis at 11:39 AM