A Look Back At Polio: The Disease That Paralyzed America And How We Defeated It 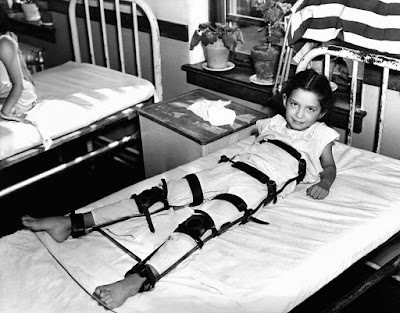 I have a different perspective of the Coronavirus than most people, as I was a victim of an earlier epidemic in the early 1950s - Polio.
Born in 1952, I contacted Polio a year later when the paralyzing disease sweep through America and the world.

I have no memory of the time, nor of the pain and suffering, thankfully, but I recall my late mother talking about it in 1978 and crying over her memory of her baby boy laying in a crib with heavy metal braces.
I thank God, my suffering parents, and Dr. Salk, who invented the Polio vaccine.
I was cured and although I have one leg a bit shorter than the other and spinal issues and pain to this day, I was able to go on and have a good childhood. I was able to join the Navy and see the world, to become a fair athlete in my late teens and 20s, to marry and raise a family, to make a fair living as a Defense Department civilian employee, and to have an interesting and rewarding profession as a writer.
As we worry about the Coronavirus today, one should take precautions, and one should look back in time at when another disease shook the world with death, illness and fear.

I have no doubt that we will soon defeat the Coronavirus, just we defeated Polio. 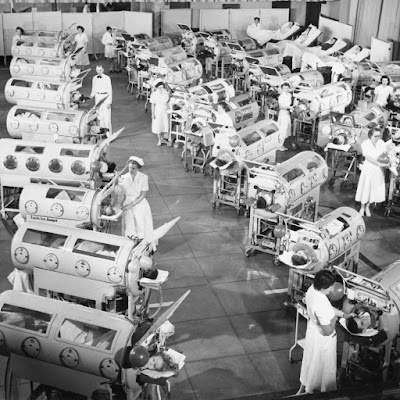 Back in 2015 Litton Weeks at NPR.org offered a piece on the Polio epidemic.
Tens of thousands of Americans — in the first half of the 20th century — were stricken by poliomyelitis. Polio, as it's known, is a disease that attacks the central nervous system and often leaves its victims partially or fully paralyzed.
The hallmarks of the Polio Era were children on crutches and in iron lungs, shuttered swimming pools, theaters warning moviegoers to not sit too close to one another.
On April 12, 2015, we celebrate the 60th anniversary of a vaccine developed by Jonas Salk that prevented the disease and eventually led to its remarkable decline. The introduction of that vaccine in 1955 was one of the biggest medical advances in American history.
You can read the rest of the piece via the below link:

https://www.npr.org/sections/npr-history-dept/2015/04/10/398515228/defeating-the-disease-that-paralyzed-america
Note: The top photo is of a poor girl with Polio wearing braces. The middle photo shows Polio victims in iron lungs. The below photos are of me at one-years-old prior to becoming a Polio victim, my parents, Ed and Claire Davis, in the 1950s, and Dr. Jonas Salk. 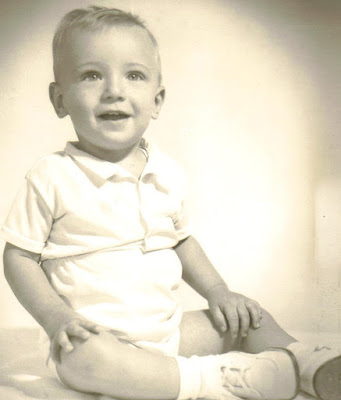 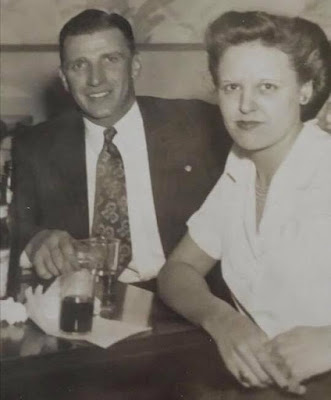 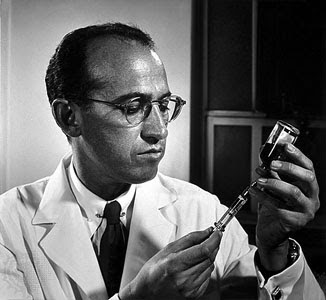