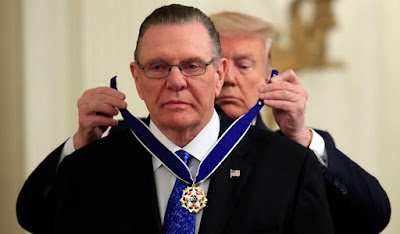 Dave Boyer at the Washington Times reports on President Trump awarding the Medal of Freedom to retired General Jack Keane.


President Trump awarded the Medal of Freedom on Tuesday to retired Gen. Jack Keane, calling the former Vietnam paratrooper and Army vice chief of staff “a courageous warrior and a fearless patriot.”


The president bestowed the nation’s highest civilian honor on Gen. Keane in a ceremony in the East Room of the White House to mark his nearly 38 years in uniform.


“Jack Keane is a visionary, a brilliant strategist and an American hero,” the president said. “Jack has given me a lot of good advice, too.”


You can read the rest of the piece and watch a video of the ceremony via the below link: