Showing The Way: My Navy Pilot For More Than 50 Years 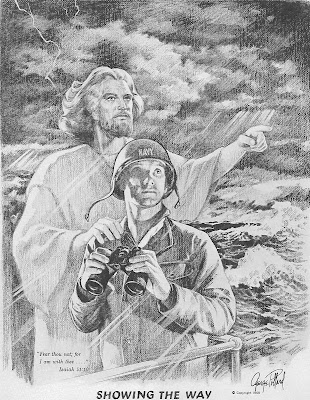 Fifty years ago I bought the above charcoal sketch at the base store at the Naval Recruit Training Center at Great Lakes, Illinois, where I attended Boot Camp in 1970.

The sketch was created by George Whitman Pollard, a World War II combat artist. He was inspired by the Biblical quote from Isaiah, "Fear thou not; for I am with thee..."

On the back of the sketch reads, "The young sailor on watch amidst the angry waves fearfully peers into the unknown as Jesus Christ appears and places His calming hand upon the sailor's shoulder, pointing the way to a safe haven ahead."

I carried the sketch with me while I served on the aircraft carrier USS Kitty Hawk, CVA 63, during the Vietnam War and later when I served two years on the Navy Harbor Tugboat USS Saugus, YTB 780, at the nuclear submarine base at Holy Loch, Scotland.

The sketch is now framed and hangs in my home office and library.
Posted by Paul Davis at 11:39 AM