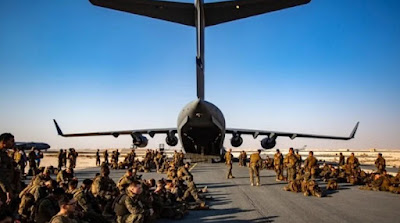 Counterterrorism magazine published my piece on the aftermath of the hasty withdrawal from Afghanistan. 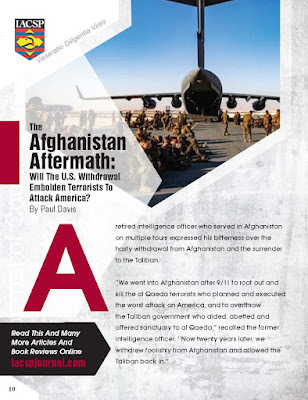 You can read the piece via the above and below pages or the below text: 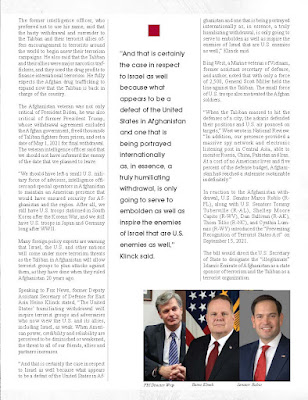 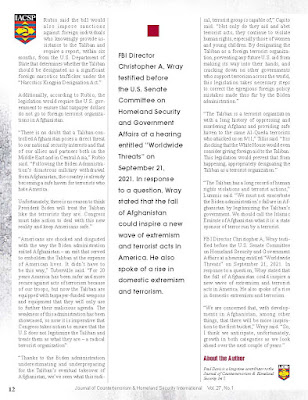 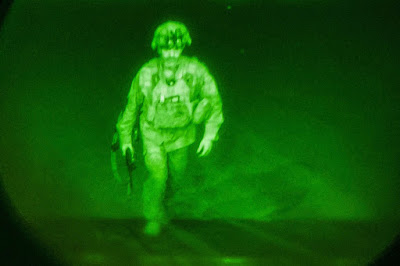 The Afghanistan Aftermath: Will The U.S. Withdrawal Embolden Terrorists To Attack America?

A retired intelligence officer who served in Afghanistan on multiple tours expressed his bitterness over the hasty withdrawal from Afghanistan and the surrender to the Taliban.

“We went into Afghanistan after 9/11 to root out and kill the al Qaeda terrorists who planned and executed the worst attack on America, and to overthrow the Taliban government who aided, abetted and offered sanctuary to al Qaeda,” recalled the former intelligence officer. “Now twenty years later, we withdrew foolishly from Afghanistan and allowed the Taliban back in.”

The former intelligence officer, who preferred not to use his name, said that the hasty withdrawal and surrender to the Taliban and their terrorist allies offers encouragement to terrorists around the world to begin anew their terrorism campaigns. He also said that the Taliban and their allies were major narcotics traffickers, and they used the drug profits to finance international terrorism. He fully expects the Afghan drug trafficking to expand now that the Taliban is back in charge of the country.

The Afghanistan veteran was not only critical of President Biden, he was also critical of former President Trump, whose withdrawal agreement excluded the Afghan government, freed thousands of Taliban fighters from prison, and set a date of May 1, 2021 for final withdrawal. The veteran intelligence officer said that we should not have informed the enemy of the date that we planned to leave.

“We should have left a small U.S. military force of advisors, intelligence officers and special operators in Afghanistan to maintain an American presence that would have ensured security for Afghanistan and the region. After all, we still have U.S. troops stationed in South Korea after the Korean War, and we still have U.S. troops in Japan and Germany long after WWII.

Many foreign policy experts are warning that Israel, the U.S. and other nations will come under more terrorism threats as the Taliban in Afghanistan will allow terrorist groups to plan attacks against them, as they have done when they ruled Afghanistan 20 years ago.

Speaking to Fox News, former Deputy Assistant Secretary of Defense for East Asia Heino Klinck stated, “The United States’ humiliating withdrawal will inspire terrorist groups and adversaries who now view the U.S. and its allies, including Israel, as weak. When American power, credibility and reliability are perceived to be diminished or weakened, the threat to all of our friends, allies and partners increases.

“And that is certainly the case in respect to Israel as well because what appears to be a defeat of the United States in Afghanistan and one that is being portrayed internationally as, in essence, a truly humiliating withdrawal, is only going to serve to embolden as well as inspire the enemies of Israel that are U.S. enemies as well,” Klinck said.

Bing West, a Marine veteran of Vietnam, former assistant secretary of defense, and author, noted that with only a force of 2,500, General Scott Miller held the line against the Taliban. The small force of U.S. troops also motivated the Afghan soldiers.

“When the Taliban massed to hit the defenses of a city, the askaris defended their positions and U.S. air pounced on targets,” West wrote in National Review. “In addition, our presence provided a massive spy network and electronic listening post in Central Asia, able to monitor Russia, China, Pakistan and Iran. At a cost of no Americans lives and five percent of the defense budget, Afghanistan had reached a stalemate sustainable indefinitely.”

The bill would direct the U.S. Secretary of State to designate the “illegitimate” Islamic Emirate of Afghanistan as a state sponsor of terrorism and the Taliban as a terrorist organization. Rubio said the bill would also impose sanctions against foreign individuals who knowingly provide assistance to the Taliban and require a report, within six months, from the U.S. Department of State that determines whether the Taliban should be designated as a significant foreign narcotics trafficker under the “Narcotics Kingpin Designation Act.”

Additionally, according to Rubio, the legislation would require the U.S. government to ensure that taxpayer dollars do not go to foreign terrorist organizations in Afghanistan.

“There is no doubt that a Taliban-controlled Afghanistan poses a direct threat to our national security interests and that of our allies and partners both in the Middle East and in Central Asia,” Rubio said. “Following the Biden Administration’s disastrous military withdrawal from Afghanistan, the country is already becoming a safe haven for terrorists who hate America.

Unfortunately, there is no reason to think President Biden will treat the Taliban like the terrorists they are. Congress must take action to deal with this new reality and keep Americans safe.”

“Americans are shocked and disgusted with the way the Biden administration exited Afghanistan – an exit that served to embolden the Taliban at the expense of American lives. It didn’t have to be this way,” Tuberville said. “For 20 years America has been safer and more secure against acts of terrorism because of our troops, but now the Taliban are equipped with taxpayer-funded weapons and equipment that they will only use to further their malicious agenda. The weakness of this administration has been showcased, so now it is imperative that Congress takes action to ensure that the U.S does not legitimize the Taliban and treats them as what they are – a radical terrorist organization”.

“Thanks to the Biden administration underestimating and underpreparing for the Taliban’s eventual takeover of Afghanistan, we’ve seen what this radical, terrorist group is capable of,” Capito said. “Not only do they aid and abet terrorist acts, they continue to violate human rights, especially those of women and young children. By designating the Taliban as a foreign terrorist organization, preventing any future U.S. aid from making its way into their hands, and cracking down on other governments who support terrorism across the world, this legislation takes necessary steps to correct the egregious foreign policy mistakes made thus far by the Biden administration.”

“The Taliban has a long record of human rights violations and terrorist actions,” Lummis said. “We must not exacerbate the Biden administration’s failure in Afghanistan by legitimizing the Taliban’s government. We should call the Islamic Emirate of Afghanistan what it is: a state sponsor of terror run by a terrorist.

FBI Director Christopher A, Wray testified before the U.S. Senate Committee on Homeland Security and Government Affairs at a hearing entitled “Worldwide Threats” on September 21, 2021. In response to a question, Wray stated that the fall of Afghanistan could inspire a new wave of extremism and terrorist acts in America. He also spoke of a rise in domestic extremism and terrorism.

“We are concerned that, with developments in Afghanistan, among other things, that there will be more inspiration to the first bucket,” Wray said. “So, I think we anticipate, unfortunately, growth in both categories as we look ahead over the next couple of years.”

Paul Davis is a long-time contributor to the Journal of Counterterrorism & Homeland Security Int’l.