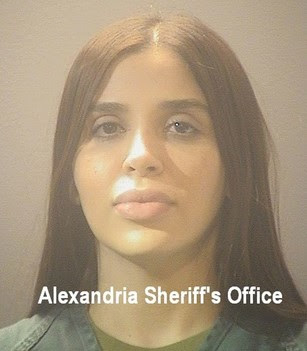 The wife of Joaquin “El Chapo” Guzman Loera, leader of the Mexican drug-trafficking organization known as the Sinaloa Cartel, was sentenced today to 36 months in prison followed by four years of supervised release for charges related to international drug trafficking, money laundering, and a criminal violation of the Foreign Narcotics Kingpin Designation Act (the Kingpin Act).

Emma Coronel Aispuro (seen in the above mugshot), 32, a dual U.S.-Mexican citizen, pleaded guilty on June 10 to a three-count criminal information. According to court documents, Coronel Aispuro conspired with Guzman Loera and other members of the Sinaloa cartel to traffic five kilograms or more of cocaine, one kilogram or more of heroin, 500 grams or more of methamphetamine, and 1,000 kilograms or more of marijuana, knowing that these narcotics would be transported into and distributed in the United States. She also conspired to launder the proceeds of that narcotics trafficking and engaged in transactions and dealings in the property of her husband, Guzman Loera, who the Treasury Department’s Office of Foreign Assets Control had designated a Significant Foreign Narcotics Trafficker.

Court documents indicate that beginning in or about 2011 and continuing to at least Jan. 19, 2017, Coronel Aispuro was a co-conspirator in the activities of the Sinaloa Cartel, an organization which was led by her husband, Guzman Loera. Notably, after Guzman Loera was captured by Mexican authorities on Feb. 22, 2014, Coronel Aispuro played a critical role in facilitating his escape from a Mexican prison, which ultimately occurred on July 11, 2015, by conducting planning meetings with other co-conspirators and by coordinating the movement of drug proceeds to finance the escape.

To facilitate the escape, Coronel Aispuro assisted in the purchase of a property near the prison and provided Guzman Loera with a watch that contained a GPS tracking device, allowing co-conspirators to dig a tunnel from that nearby property, under the prison, to Guzman Loera’s cell. Coronel Aispuro even relayed messages from Guzman Loera to other members of the Sinaloa Cartel regarding the operation of their illicit activities while he was detained.

At the sentencing hearing, U.S. District Court Judge Rudolph Contreras also entered a forfeiture money judgment against Coronel Aispuro in the amount of $1,499,970, representing proceeds of and property obtained by Coronel Aispuro as a result of her drug-trafficking activities.

This investigation was conducted by the FBI’s Washington Field Office with significant assistance from other FBI Field Offices, the Drug Enforcement Administration and Homeland Security Investigations. The Justice Department thanks the Office of Foreign Assets Control of the Department of the Treasury for their support and contributions to the case.