Hillary Clinton Dresses up As President For Halloween: Three From The Bee 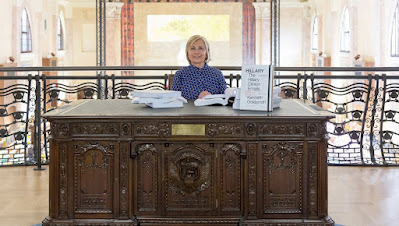 Below are three satirical pieces from the Babylon Bee:

Hillary Clinton Dresses Up As President For Halloween

CHAPPAQUA, NY—According to sources, former First Lady and skilled assassin Hillary Clinton is joining the Halloween festivities this year by dressing up as a real live president.

"I really wanted to show little girls everywhere that if you believe in yourself and kill a lot of people, you can be president of the United States someday," she said, "...just like I was. I was the rightful president. I WAS THE RIGHTFUL PRESIDENT!" She then screamed and threw an open bottle of wine against the wall and made her servants pick it up.

Hillary will be wearing a realistic president costume and sitting behind a handmade replica of the resolute desk to complete the look.

"This is where I sign my executive orders to bail out banks and drone strike brown people in the Middle East," she said proudly as she signed imaginary papers on her desk. "You may address me as Madam President. Happy Halloween!"

Sources say that Bill Clinton will also be dressing up for Halloween, as someone who's not married to Hillary Clinton. 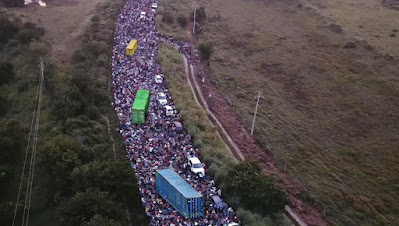 DEL RIO, TX—Secretary of Transportation Pete Buttigieg announced that the supply chain crisis wreaking havoc on the nation’s economy has been resolved, and praised Biden’s brilliance and ingenuity in proposing the solution: Ask each migrant coming into the country to help carry a shipping container.

“Big, big shiny boats are flocking to the shores of Mexico,” said the cabinet member. “And all the choo-choo trains and beep-beep vroom-vrooms can't handle all the containers! Oh no! So let's just have the thousands and thousands of migrants carry them in! It’s a solution that can only be attributed to Biden’s progressive policies.”

One immigrant praised the opportunity to have a job before even entering the United States illegally. “It’s unbelievable that only a few weeks ago the White House sent my family a personal invitation, map, GPS, and detailed instructions on how to cross the border illegally, and here I am now, using my skills to carry shipping containers and boost the American economy for a modest $450,000 salary. Gracias Señor!”

Border Patrol agents trying to stop the illegal immigrants from bringing the vital shipments into the country were arrested and sent to Guantanamo Bay. 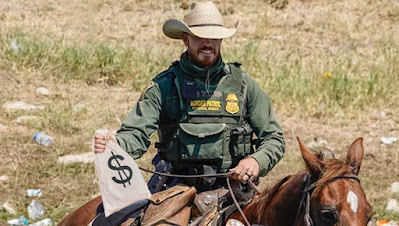 DEL RIO, TX—After weeks of being placed on leave, Texas border patrol agents are finally returning to the border on their horses. This time, however, they will be carrying giant sacks of money instead of their leather reins.

"This is our way of showing who we are as Americans," said the newly appointed Border Patrol Chief Zamby Fiddlepoot. "Our agents have all been given 320 hours of anti-racist and sensitivity training. We also chemically castrated them. They will just hand out hugs and money now."

The newly trained agents will patrol the border day and night, giving $450,000 to every illegal crosser they meet.

"Howdy, pardners!" said one officer to a small group of 3,200 migrants approaching him. "Please allow me to apologize for oppressing you with my cisgender colonial whiteness! Please take this money as a token of our apology and come on in!"

Unfortunately for the migrants, experts predict $450,000 will not be enough to fill a tank with gas in a few weeks due to inflation.

You can read more humor pieces via the below link:

Labels: Humor, satire, The Babylon Bee, Three From the Bee