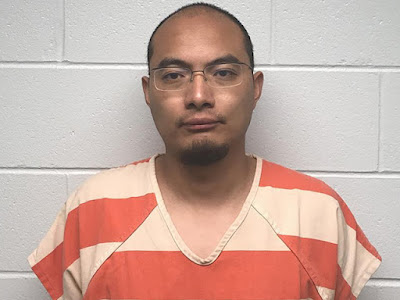 A federal jury convicted Yanjun Xu, a Chinese national and Deputy Division Director of the Sixth Bureau of the Jiangsu Province Ministry of State Security, of conspiring to and attempting to commit economic espionage and theft of trade secrets. The defendant is the first Chinese intelligence officer to be extradited to the United States to stand trial.

“This conviction of a card-carrying intelligence officer for economic espionage underscores that trade secret theft is integral to the PRC government’s plans to modernize its industries,” said Assistant Attorney General Matthew G. Olsen of the Justice Department’s National Security Division. “But this conviction also serves notice that the United States will not sit by as China, or any other nation-state, attempts to steal instead of researching and developing key technology. Instead, and with the support of our allies, we will continue to investigate, prosecute, and hold accountable those who try to take the fruits of American ingenuity illegally.”

“The jury, by its guilty verdict here today, held Xu accountable for his classic spy techniques,” said Acting U.S. Attorney Vipal J. Patel for the Southern District of Ohio. “Xu conspired to commit economic espionage on behalf of the Chinese government, and he tried to steal the valuable innovation and trade secrets of industry-leading American aviation technology companies. This office will continue to seek to protect American innovation and hold accountable those who attempt to steal our nation’s science and technology, regardless of status or affiliation, whether civilian, military or spy.”

“This was state-sponsored economic espionage by the PRC designed to steal American technology and put Americans out of work,” said Assistant Director Alan E. Kohler Jr. of the FBI’s Counterintelligence Division. “For those who doubt the real goals of the PRC, this should be a wakeup call; they are stealing American technology to benefit their economy and military. The FBI is partnering with over 50 U.S. Government agencies to share information and investigative resources to stop the PRC’s illegal activities.”

According to court documents and evidence presented at trial, beginning in at least December 2013, Xu used multiple aliases to target specific companies in the United States and abroad that are recognized as leaders in the field of aviation. He identified experts who worked for the companies and recruited them to travel to China, often initially under the guise that they were traveling to give a presentation at a university. Xu and others paid the experts stipends on top of covering travel costs. According to today’s conviction, Xu attempted to steal technology related to GE Aviation’s exclusive composite aircraft engine fan – which no other company in the world has been able to duplicate – to benefit the Chinese state.

In March 2017, a GE Aviation employee in Cincinnati, Ohio, was solicited to give a report at a university in China. The employee traveled to China two months later to present at the university and was introduced to Xu. Xu and others paid the employee’s travel expenses and a stipend.

In January 2018, Xu requested “system specification, design process” information from the employee and – with the cooperation of the company, who was working with the FBI – the employee emailed a two-page document from the company that included a label that warned about the disclosure of proprietary information.

In February 2018, Xu began discussing with the employee the possibility of meeting in Europe during one of the employee’s business trips and asked the employee to send a copy of the file directory for his company-issued computer.

Xu traveled to Belgium on April 1, 2018, to meet with the employee and was arrested at that time.

The FBI investigated the case.

The Criminal Division’s Office of International Affairs secured Xu’s extradition to the United States, with valuable assistance provided by the government of Belgium and the Belgian Federal Police. 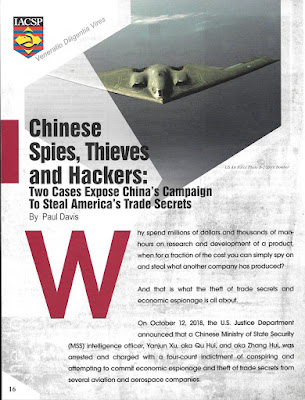 You can also read my Counterterrorism magazine piece that covered the Xu case and more via the below link: