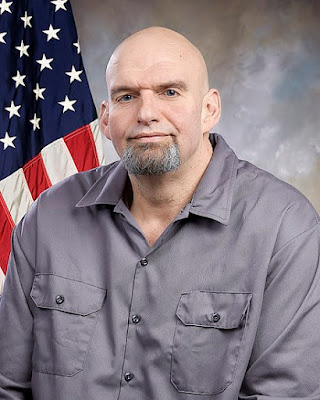 These days if you want to read the bad news about crime in Philadelphia and elsewhere, you are more than likely to read about it in the New York Post rather than our local newspapers.

As the Post noted, Fetterman said he was against “tough on crime” policies and “very excited” to support Philly DA Larry Krasner’s criminal justice reforms in a bid for a far-left group’s endorsement for lieutenant governor in early 2018. In a questionnaire issued by the activist group Reclaim Philadelphia, Fetterman vowed to use the lieutenant governor’s office “as a bully pulpit” for criminal justice reform.

The Post further noted that Fetterman was the lone member of the Board of Prisons that voted to release a man serving a life sentence for murder. And the Post made mention that the Oz campaign has hammered Fetterman for his endorsement of Krasner, who has seen murders rise from 353 when he took office in 2018 to 562 last year.

I checked out the Reclaim Philadelphia 2018 questionnaire online. In response to a question about what opportunities the lieutenant governor offered, Fetterman replied that he would use the office to advocate for a progressive agenda.

When asked if he agrees that “tough on crime” policies have overcrowded prisons and what he would do as Chairman of the Board of Pardons to reduce the prison population, he replied, “Absolutely agree.

“As Chairman of the Board of Pardons, I will work with the Board and the Governor’s office to streamline the application process for clemency. Further, I will advocate for clemency and shortening sentences. I will consult with stakeholders such as the NAACP to provide insight into how we can support communities most impacted by mass incarceration.”

When asked what opportunities the Board of Pardons offered for the future of criminal justice in Pennsylvania. He was also asked what the term “restorative justice” meant to him and how it differed from a punitive system.

Fetterman replied, “The Board of Pardons should be used as a bully pulpit for the larger issue of criminal justice reform, and push legislators to move forward on bills like the Clean Slate Act. There is a real opportunity to build a statewide platform that elevates and exposes the damage created by the school-to-prison pipeline, the prison industrial complex, and “tough on crime” policies like “Stop and Frisk” and cash bail. Restorative justice to me is just common sense. I based my approach to law enforcement policy on restorative justice practices as Mayor of Braddock. We trained our police to show discretion — just because you can charge someone with a nonviolent offence, doesn’t mean that you should. Restorative justice means that you create real avenues for people to reintegrate into society, and don’t penalize people who struggle with poverty, addiction and/or disability.”

Fetterman added that he supports Mayor Kenney’s stance on Philadelphia as a sanctuary city and he said he was “very excited by the progressive criminal justice reform platform that the then-newly elected District Attorney was setting into motion.”

“John Fetterman doesn’t know anything about crime other than how to make it worse,’ said Brittany Yanick, the communications director for Dr. Oz. “He proved that as Mayor of Braddock where he oversaw a dramatic surge in violent crime. Yet, fraudulent Fetterman has been allowed to repeatedly claim that releasing one-third of Pennsylvania inmates would ‘not make anybody less safe.’ Now, Pennsylvania state data actually proves him dangerously wrong. On top of that, he’s repeatedly voted to pardon convicted first- and second-degree murderers – many of whom are back on our streets. John Fetterman’s policies are deadly, dangerous, and wrong for Pennsylvania.”

There are many good reasons to not vote for Fetterman; his poor health, his support of economic policies that have nearly tanked our economy, his total support of our Mister Magoo president, Joe Biden, and his fraudulent pose as a working man. Although he looks like the left’s idea of a blue-collar Trump supporter, he’s actually from a wealthy family who supported him financially until he was 49.

But to me, it is his radical stance on crime issues that should cause voters to reject him.

With crime and gun violence rising in Philadelphia and across Pennsylvania and the rest of the country, do we really want a United States Senator who holds views on crime along the line of our failed mayor and DA?