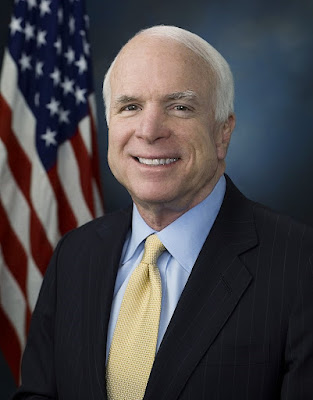 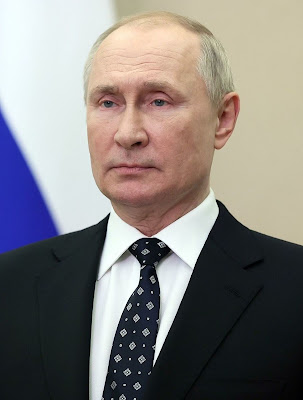 Counterterrorism magazine published my piece on the late John McCain and Russian leader Vladimir Putin. You can read the pages below or the below text: 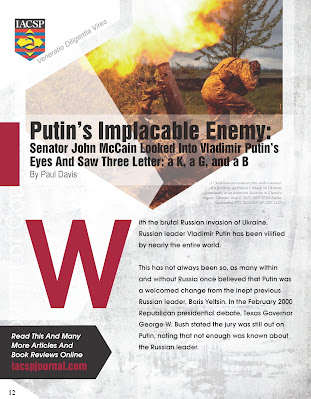 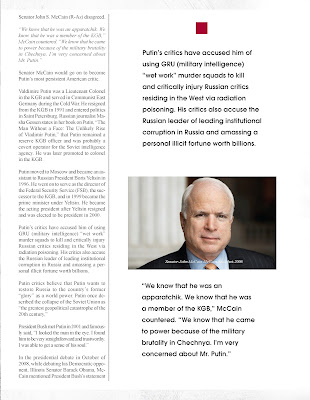 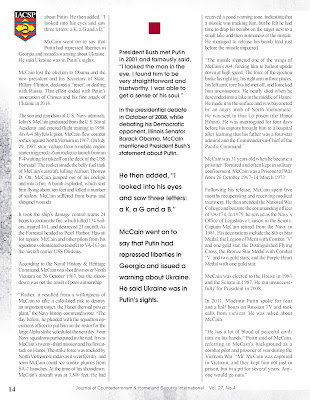 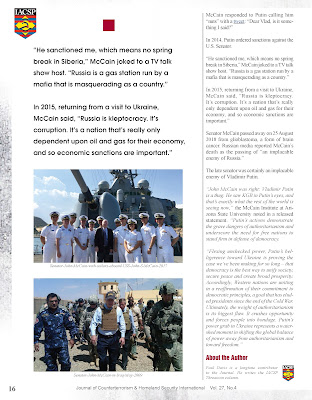 Putin’s Implacable Enemy: Senator John McCain Looked Into Vladimir Putin’s Eyes And Saw Three Letter: a K, a G, and a B

With the brutal Russian invasion of Ukraine, Russian leader Vladimir Putin has been vilified by nearly the entire world.

This has not always been so, as many within and without Russia once believed that Putin was a welcomed change from the inept previous Russian leader, Boris Yeltsin. In the February 2000 Republican presidential debate, Texas Governor George W. Bush stated the jury was still out on Putin, noting that not enough was known about the Russian leader.

Senator McCain would go on to become Putin’s most persistent American critic.

Valdimire Putin was a Lieutenant Colonel in the KGB and served in Communist East Germany during the Cold War. He resigned from the KGB in 1991 and entered politics in Saint Petersburg. Russian journalist Masha Gessen states in her book on Putin, “The Man Without a Face: The Unlikely Rise of Vladimir Putin,” that Putin remained a reserve KGB officer and was probably a covert operator for the Soviet intelligence agency. He was later promoted to colonel in the KGB.

Putin moved to Moscow and became an assistant to Russian President Boris Yeltsin in 1996. He went on to serve as the director of the Federal Security Service (FSB), the successor to the KGB, and in 1999 became the prime minister under Yeltsin. He became the acting president after Yeltsin resigned and was elected to be president in 2000.

Putin’s critics have accused him of using GRU (military intelligence) “wet work” murder squads to kill and critically injury Russian critics residing in the West via radiation poisoning. His critics also accuse the Russian leader of leading institutional corruption in Russia and amassing a personal illicit fortune worth billions.

Putin critics believe that Putin wants to restore Russia to the country’s former “glory” as a world power. Putin once described the collapse of the Soviet Union as “the greatest geopolitical catastrophe of the 20th century,”

President Bush met Putin in 2001 and famously said, “I looked the man in the eye. I found him to be very straightforward and trustworthy. I was able to get a sense of his soul.”

In the presidential debate in October of 2008, while debating his Democratic opponent, Illinois Senator Barack Obama, McCain mentioned President Bush’s statement about Putin. He then added, “I looked into his eyes and saw three letters: a K, a G and a B.”

McCain went on to say that Putin had repressed liberties in Georgia and issued a warning about Ukraine. He said Ukraine was in Putin’s sights.

McCain lost the election to Obama and the new president and his Secretary of State, Hillary Clinton, declared a “reset” in dealing with Russia. That effort ended with Putin’s annexation of Crimea and his first attack of Ukraine in 2014.

The son and grandson of U.S. Navy admirals, John S. McCain graduated from the U.S. Naval Academy and entered flight training in 1958. An A-4 Skyhawk pilot, McCain flew combat sorties against North Vietnam in 1967. On July 29, 1967, stray voltage from a mobile engine starter triggered a Zuni rocket to launch from an F-4 waiting for takeoff on the deck of the USS Forrestal. The rocket struck the belly fuel tank of McCain’s aircraft, killing Airman Thomas D. Ott. McCain jumped out of his cockpit and into a fire. A bomb exploded, which sent him flying about ten feet and killed a number of sailors. McCain suffered from burns and shrapnel wounds

It took the ship’s damage control teams 24 hours to contain the fire, which killed 134 Sailors, injured 161, and destroyed 21 aircraft. As the Forrestal headed to Pearl Harbor, Hawaii for repairs, McCain and other pilots from his squadron volunteered to transfer to VA-163 on the aircraft carrier USS Oriskany.

According to the Naval History & Heritage Command, McCain was shot down over North Vietnam on 26 October 1967, but the shootdown was not the result of poor airmanship.

“Rather, it resulted from a willingness of McCain to take a calculated risk to destroy an important target: the Hanoi thermal power plant,” the Navy history command wrote. “The day before, he pleaded with the squadron operations officer to put him on the roster for the large Alpha strike scheduled the next day. Four Navy squadrons participated in the raid. It was McCain’s twenty-third mission and his first attack on Hanoi. The strike force was tracked by North Vietnamese radars as it went feet dry, and soon McCain could see smoke plumes from SA-2 launches. At the time of his shootdown, McCain’s aircraft was at 3,500 feet. He had received a good warning tone, indicating that a missile was tracking him, but he felt he had time to drop his bombs on the target next to a small lake and then outmaneuver the missile. He managed to release his bomb load just before the missile impacted.

“The missile shattered one of the wings of McCain’s A-4, forcing him to bailout upside down at high speed. The force of the ejection broke his right leg, his right arm in three places, his left arm, tore his helmet off, and knocked him unconscious. He nearly died when he descended into a lake in the middle of Hanoi. He made it to the surface and was bayoneted by an angry mob of North Vietnamese. He was sent to Hoa Lo prison (the Hanoi Hilton). He was interrogated for four days before his captors brought him to a hospital after learning that his father was a four-star admiral and the Commander-in-Chief of the Pacific Command.”

McCain was 31 years old when he became a prisoner. Tortured and often kept in solitary confinement, McCain was a Prisoner of War from 26 October 1967–14 March 1973:

Following his release, McCain spent five months recuperating and receiving medical treatment. He then attended the National War College and became the commanding officer of VA-174, In 1979, he served as the Navy’s Office of Legislative Liaison in the Senate. Captain McCain retired from the Navy in 1981. His decorations include the Silver Star Medal, the Legion of Merit with Combat ‘V’ and one gold star, the Distinguished Flying Cross, the Bronze Star Medal with Combat ‘V’ and two gold stars, and the Purple Heart Medal with one gold star.

In 2011, Vladimir Putin spoke for four and a half hours on Russian TV and took calls from viewers. He was asked about McCain.

“He has a lot of blood of peaceful civilians on his hands,” Putin said of McCain, referring to McCain’s background as a combat pilot and prisoner of war during the Vietnam War. “Mr. McCain was captured in Vietnam, and they kept him not just in prison, but in a pit for several years. Anyone would go nuts.”

McCain responded to Putin calling him “nuts” with a tweet: “Dear Vlad, is it something I said?”

In 2014, Putin ordered sanctions against the U.S. Senator.

“He sanctioned me, which means no spring break in Siberia,” McCain joked to a TV talk show host. “Russia is a gas station run by a mafia that is masquerading as a country.”

In 2015, returning from a visit to Ukraine, McCain said, “Russia is kleptocracy. It’s corruption. It’s a nation that’s really only dependent upon oil and gas for their economy, and so economic sanctions are important.”

Senator McCain passed away on 25 August 2018 from glioblastoma, a form of brain cancer. Russian media reported McCain’s death as the passing of “an implacable enemy of Russia.”

The late senator was certainly an implacable enemy of Vladimir Putin.

“John McCain was right: Vladimir Putin is a thug. He saw KGB in Putin’s eyes, and that’s exactly what the rest of the world is seeing now,” the McCain Institute at Arizona State University noted in a released statement. “Putin’s actions demonstrate the grave dangers of authoritarianism and underscore the need for free nations to stand firm in defense of democracy.

“Flexing unchecked power, Putin’s belligerence toward Ukraine is proving the case we’ve been making for so long – that democracy is the best way to unify society, secure peace and create broad prosperity. Accordingly, Western nations are uniting in a reaffirmation of their commitment to democratic principles, a goal that has eluded presidents since the end of the Cold War. Ultimately, the weight of authoritarianism is its biggest flaw. It crushes opportunity and forces people into bondage. Putin’s power grab in Ukraine represents a watershed moment in shifting the global balance of power away from authoritarianism and toward freedom.”

Paul Davis is a longtime contributor to the Journal. He writes the IACSP Threatcon column. 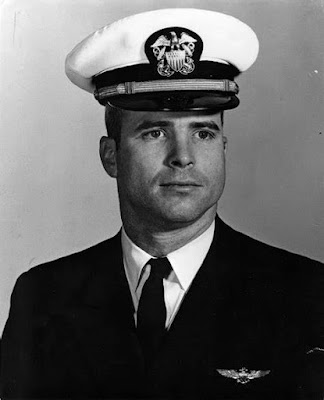 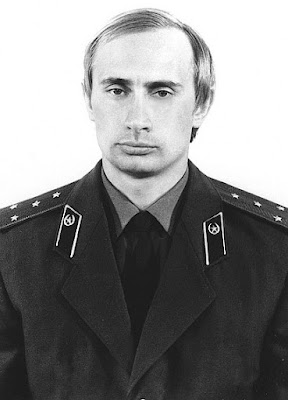 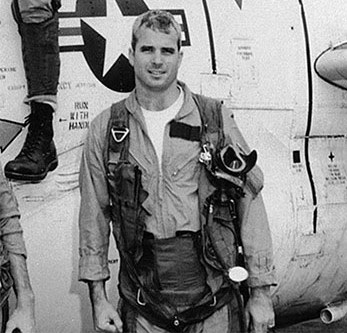 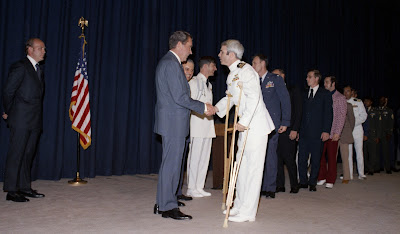