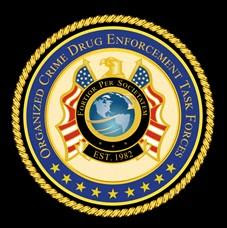 The U.S. Justice Department released the below information this past Tuesday:

WASHINGTON – The Department of Justice’s Organized Crime Drug Enforcement Task Forces (OCDETF) was created by Presidential Order four decades ago. On Oct. 14, 1982, in the Great Hall of the Department of Justice building, President Ronald Reagan announced a new coordinated federal government effort bringing together prosecutors and law enforcement agencies to attack the command and control elements of the drug trafficking organizations responsible for moving massive quantities of illicit narcotics into the country.

The White House directed that the OCDETF’s top priority would be to disrupt the sales and distribution networks of the traffickers. Some of the department’s most notable successes against drug cartels have resulted from OCDETF coordinated investigations and prosecutions. OCDETF was instrumental in taking down the powerful Colombian cartels of the 1980s; the notorious and violent Mexican cartels such as the Tijuana, Juarez and Gulf Cartels in the 1990s; and the methamphetamine, heroin, fentanyl and opioid threats from all over the world in the last two decades.

“Since its founding, OCDETF has been a synchronizer and our role is to incentivize prosecutors to lead smart, creative law enforcement agents in investigations focused on priority targets of organized criminal groups and the illicit financial networks that support them,” said OCDETF Director Adam W. Cohen. “Today, OCDETF provides a forward leaning structure for our partners to work together and leverage each other’s strengths, capabilities and legal authorities resulting in continued positive impacts to the nation.”

OCDETF’s governance, bringing leadership to the multi-agency transnational organized crime mission and focus on joint priority targets has generated genuine measurable accomplishments — over 34,000 multi-agency cases against priority targets, over 124,000 indictments of almost 360,000 defendants, and incredibly, over 15,690 of those resulted in impactful disruption, or even dismantlement of criminal organizations.

“As OCDETF begins our 41st year, we will continue to provide a coordination platform for comprehensive investigations and prosecutions of the most dangerous transnational criminal organizations, the successful result of which is to make our nation safer,” said OCDETF Director Cohen.